Most of the boxing world – including the bookmakers – believe Tyson Fury will dominate Anthony Joshua if they meet inside the ring. But one man who disagrees is former world cruiserweight king Toney Bellew.

The Liverpudlian, also twice a victor over former world heavyweight champion David Haye, fought for the same Matchroom stable as Joshua, and believes the Londoner’s power would upset the odds if and when the blockbuster finally happens.

Asked by IFL TV to rate the top men in boxing’s marquee division, Bellew said: “The top three heavyweights today? If you’re going on what they’re actually doing you can’t really knock Tyson Fury and what he’s done when he’s come back. So I understand why people have got him number 1 now. People are gonna say this doesn’t make sense, I have to put Tyson Fury number 1 but I still think AJ beats him.

“He’s so relentless, so powerful, so athletically explosive and dynamic, I don’t think Fury could keep him off.”

Many experts look at Fury’s demolition of then-WBC king Deontay Wilder in Las Vegas in February as proof that even a big puncher would not be good enough to dethrone ‘The Gypsy King’. But Bellew takes a different view.

“Deontay Wilder technically isn’t sound enough or good enough to get himself in position to punish Tyson Fury,” he said. “Now what you’ve got to take into consideration is, Anthony Joshua is an Olympic gold medallist, Anthony Joshua’s technically sound. He’s also not the finished article, he’s also improving.  And the thing is, he’s so much more of a rounded boxer than Deontay Wilder.

If Deontay Wilder can have the best version of Tyson Fury on the floor and out on his feet, then believe you me, then Anthony Joshua will not let you off the hook. He’s probably the most ruthless finisher in the heavyweight division today. He’s just got so much going for him.

“People will say ‘oh, you’re Matchroom and you’re AJ’s friend’, I’ve know Tyson for longer than I have known AJ, so it’s no bias at all, it’s just me giving my opinion.” 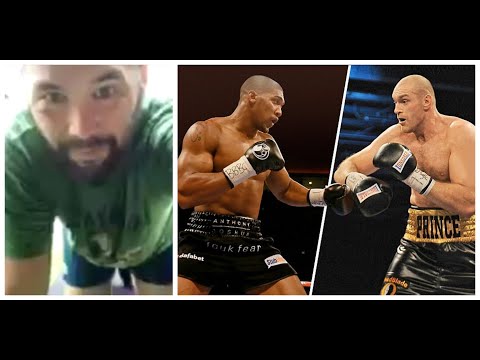 Bellew rates Fury highly, and as a result he does have one important caveat for that big-fight prediction.

He explained: “One thing I would say, if it didn’t happen within them first six rounds, he’s (Joshua) in a whole lot of trouble. If it goes past six, he’s in a world of trouble. Because Fury is an enigma, he’s a fighter who you can’t solve, no-one has been able to solve the puzzle that he presents to you. He’s defensively so good and his footwork is so advanced for a man of his weight and size, that it leaves fighters puzzled.

“He’s been on his back numerous times, the cruiserweight Steve Cunningham – who’s a brilliant fighter – he had Fury down and really really hurt. And even someone with his speed advantage couldn’t still catch up with Tyson Fury and finish him off. So it lets you know that Fury is very very capable even when hurt.

But as I’ve said before, AJ is such a phenomenal force going forward, he’s just impossible to keep off, and there’s not a fighter that he’s fought that he hasn’t hurt and hasn’t had on the back foot. It’s only a matter of time before he catches Fury.

“If it does goes past 6 he’s in a lot of trouble because Fury is unbelievable to figure out but I think he will.”

For now, all Bellew really wants – like the rest of the boxing fraternity – is for the fight to actually take place.

“Its just an opinion and everyone’s got them. The most important thing is the fight just happens, cos we don’t need these guys to avoid each other. We just need it to happen and to get a clear and resounding champion and heavyweight king  of the world.”