Trevor Bryan says when he meets Daniel Dubois in Miami later this month, it will be a showdown between ‘an okay guy’ and ‘a nightmare’. No prizes for guessing who is who.

The 32-year-old Bryan (22-0 with 15 wins inside distance) defends his WBA regular heavyweight title against the exciting Brit on a card which will be televised live on BT Sport in the UK.

Trevor is talking a good game ahead of the big clash with the 17-1 ‘Dynamite’ from London, and he has little doubt about the outcome despite being a 7/1 underdog. Part of that rationale is fuelled by a belief that Dubois ‘quit’ in his only pro defeat so far, at the hands of Joe Joyce back in November 2020.

‘An okay guy vs a nightmare’

He told the Unibet Lowdown: “Daniel Dubois is a strong fighter, he has fought some good guys, but I am on a different level. You saw that when he came up against some good opposition, he quit, gave up.

“You don’t quit, you don’t give up. I would rather go out on my shield. He is an okay guy but he is going in against a nightmare, I will be a nightmare for him and not the fight that he wants. Maybe he should have went back and tried to reverse the loss he had against Joe Joyce before he came to the champion. 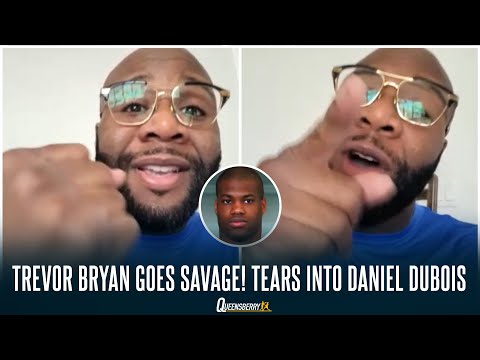 “Now that he’s said he wants the champion, he begged for this fight and now he has it. He has it and now he has to pay for it. I’m not the type of fighter where you can step in the ring and think you can walk all over me. I am not heavyweight champ for no reason and on June 11 I’m gonna show everybody that I am a name that you are supposed to respect.”

Bryan says he approaches every fight with huge urgency, in the belief – real or otherwise – that it could be his last. He knows the challenge that awaits him, and the need to give everything.

“I fight like every fight is my last fight. I am gonna give my heart, my soul and every inch, every bit of strength I have in this fight on June 11 because, even with the heavyweights, this career doesn’t last long. Every opportunity I do get with names like Daniel Dubois and fighters after this, you want to fight your hardest and show everybody you have the heart and show everybody your skills are going to carry you along.

“So yeah, I am treating this like it is my last fight,” added the 32-year-old, before making reference to Dubois’ sole professional setback against Joe Joyce at the end of 2020.