After less than two months in retirement, Tyson Fury is now officially back out of retirement.

‘The Gypsy King’ said he was calling it a day at the very top on April 23 after knocking out fellow Brit Dillian Whyte inside six rounds at a packed Wembley Stadium.

Few experts of course believed Fury, just the latest in a long line of top boxers who said they were quitting, but then fought again. And Fury of course is now in his absolute prime at the age of 33 with a 32-0-1 record and the WBC, Ring magazine and lineal heavyweight titles.

So it was no surprise on Tuesday when the Morecambe man  confirmed HE IS ready to fight again, vs the winner of that Oleksandr Usyk vs Anthony Joshua rematch – expected to take place on August 20 in Saudi Arabia.

Tyson Fury is out of retirement

Fury told Queensberry Promotions: “We have some very exciting news coming. I think the world has been waiting for a plan of action.

“Last week we (Fury with his promoter Frank Warren) had a nice Italian down in London and a long conversation about lots of stuff. I will be back in the ring 100 per cent, just like in the movie when Jerry Maguire shouted ‘Show Me The Money!’. 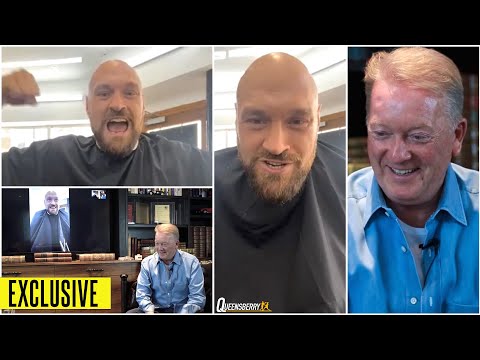 “If anyone can show me the money then it’s Frank Warren, I call him the Magic Man and we are going to make some big, big things happen.”

Usyk vs Joshua 2 will see the IBF, WBA and WBO belts on the line after the Ukrainian superstar defeated AJ to win them at Tottenham Hotspur Stadium last September.

Whatever the result there, it sets up a mouthwatering showdown to crown the first undisputed heavyweight champion of the world since Lennox Lewis way back in 1999.

Fury clearly expects Usyk to win, though a showdown with fellow Brit Joshua would smash all box-office records and earn him even more cash.

“When this middleweight knocks out this bodybuilder there will only be one man to sort this absolute circus out.

“What I would say to the people who want this fight to happen is: you better have a big cheque book, because to bring the big Gypsy King out of retirement to redeem this country – yet again – it’s going to cost.

“I am a prize fighter and I do fight for prizes but it is going to cost if you want me to do a mission on this middleweight and show what a real heavyweight does to them.

“And that will be expensive, they will need deep pockets and then we can talk but not before the Usyk vs Joshua fight happens first, because it is pointless before.”