Tyson Fury vs Daniel Dubois could be a blockbuster of a heavyweight showdown some day in the future, but the pair have already met inside the ropes – back when ‘The Gypsy King’ weighed some 27 stone.

The WBC, Ring magazine and lineal heavyweight king relived the day a few years ago when he decided to have an impromptu sparring session with the now 22-year-old ‘Dynamite’

He told BT Sport: “I’d come down to the gym one random Saturday morning. Got the bug to have a little spar. And Daniel was sparring with Hughie (Fury) at the time and a few other lads in the gym.

“I had no equipment with me, no headguard, no bandages. I don’t remember exactly what I was wearing, but I remember I had one shoe off and one shoe on. It was what it was. Big fat 27 stone. We had a little move around and it was a pleasure. 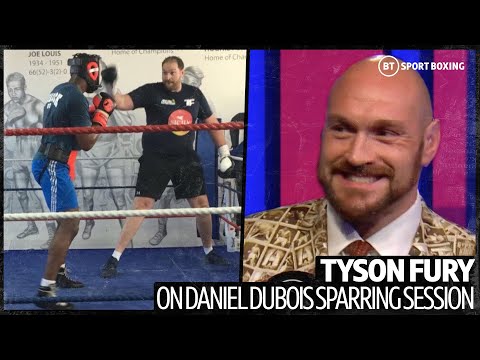 “He was only a young lad, I think maybe he’d had one fight or maybe never even had a professional fight. I found that he was a very good fighter straight away.”

Dubois, who recently defeated Dutchman Ricardo Snijders to extend his unbeaten record to 15-0 as a professional, is due to meet fellow British prospect Joe Joyce on Saturday November 28 on BT Sport.

And Fury is among the experts who are waxing lyrical about his potential for future greatness.

“He’s absolutely fantastic and he does everything well for a heavyweight,” he said.

“Young heavyweight, he’s a beast, look at him. He’s in absolutely fantastic shape, he destroys everything he hits and what more can you ask from a young heavyweight.”

Dubois is already ranked highly by the World Boxing Organisation, with only mandatory contender Oleksandr Usyk ahead of him currently.