The latest Tyson Fury documentary is another beauty – with more must-watch TV courtesy of the WBC and Ring magazine world heavyweight champion.

BT Sport’s new original entitled ‘1548 Days: Return of The Gypsy King’ charts Fury’s journey back from the depths of despair after his retirement, huge weight gain and mental health issues following that epic victory over Wladimir Klitschko in Germany in 2015.

It begins with an overweight Fury in the gym starting to trim down from 26 stone, and ends with him battering American Deontay Wilder to defeat inside seven rounds in Las Vegas.

BT Sport, who broadcast all of Fury’s fights on UK television currently, do a wonderful job of mixing in brilliant behind-the-scenes footage together with highlights of the fights which took Fury back to the summit.

There are moments of reflection with Fury, his then trainer Ben Davison and the fighter’s backroom team talking about what it took to get back into shape, but also the amazing natural physical gifts which made it easier.

And on a lighter note the documentary takes us backstage as Fury and promoter Frank Warren arrive on the set of ‘Good Morning Britain’ to be grilled by star presenters Piers Morgan and Susannah Reid.

The 35-minute documentary – available via BT Sport on YouTube, charts Fury’s journey right through to his ultimate redemption – that astonishing demolition of Wilder in February 2020. 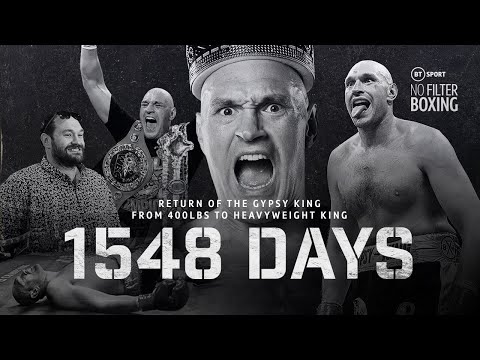 Not surprisingly the documentary is littered with unforgettable one-liners and monologues from the man himself, here are just some of them…

“Joshua’s took a fight rather than unifying the division, or having the opportunity to become undisputed champion of the world. He’s opted to take a 40-year-old man, Povetkin – who is half his size. This is what turns fans off of boxing.

“You can’t say nothing about Deontay – there’s nothing you can say about him really. He wants to fight doesn’t he?. He’s offered to fight Joshua many times and taking little money. You’ve got me coming back after three years out of the ring and losing 25 stone. I’ll fight Deontay Wilder, in America. It takes someone like me to go over and beat someone up. Because at the minute the Americans are showing the Brits up, rotten. The Brits are running away scared, and there’s only me who’s saying ‘Right, I’ll have to fight him’.

“If I’m ready if I’m ready, if I’m not, I’m not. I can’t have him calling us over here s***houses and everybody in America saying: ‘Oh man, them British guys they don’t really fight, blah blah blah’. I’ll go over to America and I’ll fight him and knock him spark out. Can’t say any fairer than that. I’ve got to get Francesco Pianeta out of the way and then I’ll come for Wilder, because Joshua’s a s***house, I’ll apologise for him. And Eddie Hearn – no balls. But I’m the man, I’ll fight you, no problem.”

Tyson Fury on the heavyweight division

“If I can’t annihilate this division, this weak, poor division with no boxers in it at all, then I must be useless myself. I was speaking to Roy Jones recently, and he said: ‘If you can’t come back and wipe the floor with all these bums, then you must be a bum yourself’. He said ‘you’re never gonna be a great like me if you can’t beat all these back-to-back’. I said: ‘Right, it’s a deal, it’s on’. If I lose to these bums, I’ll never be able to show my face in public again, I’ll never be able to call myself ‘The Gypsy King’ any more, through losing to a weightlifter and a football player. It’s not happening is it.”

“Listen, it’s alright fighting under nice circumstances, all comfortable, training at home – lovely jubbly with the kids, oh lovely. It’s what happens when you need to go out of your comfort zone, behind enemy lines like James Bond does, 007. Get in there, do the assassination, get out. I’ve done it before in Germany, hostile environment, 50,000 Germans, went in there and took his belts, chore done, see ya later.  I’ll do the same with this other idiot, Wilder.”

Tyson Fury on his critics

“There are people out there – haters, lovers, whatever they are – who don’t think I’m the best on the planet. It’s up to me to prove it.”

Tyson Fury on his comeback from the brink

“No matter what happens in the Wilder fight, I’ve already won. You know where I’ve come from and what I’ve been through and what I’ve achieved in coming back. Just to be sat here in the right mind and in shape, that is worth all the wins in the world to me. Because I know I wouldn’t be alive, if I didn’t change my act, back then.”

I told everybody with with a pair of ears, that ‘The Gypsy King’ would return to his throne. I’m a man of my word. I told everybody – I told Deontay Wilder, I told his team, I told the world. I said I’m going for a knockout, I ain’t going for a points job. We trained for a knockout. We wasn’t tapping around in that gym. We were knocking a 250lb bag off its hooks every day.”

“I believe that you’ve got to do, on the night, what comes natural. I don’t know what I’m going to do before I even go in there. That great fella said a man with no gameplan or tactics is a man on the road to nothing. But I’ve got to disagree, because I’ve not followed many game plans in my boxing career but I’m still undefeated.”

“He was surprisingly fit when we started back. He was training relatively hard when he was at full 26 stone. He was capable of a lot more than he should have been capable of.”

“He said it from day one, best heavyweight in the world. Ain’t nobody beating him!”