Tyson Fury says Dillian Whyte raised the white flag by not turning up for their London press conference on Tuesday and he gave ‘The Body Snatcher’ a new nickname  – ‘Frillian Whyte Knickers’.

‘The Gypsy King’ mocked his April 23 opponent when the Londoner stayed in Portugal instead of rocking up at Wembley Stadium, where the two will meet for the WBC, Ring magazine and lineal world heavyweight titles. It is the biggest fight in the UK since Lennox Lewis vs Frank Bruno in 1993. 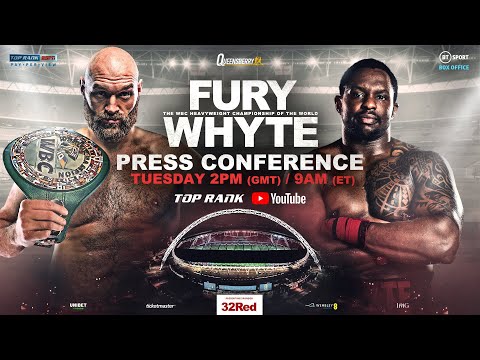 Fury’s co-promoter Frank Warren revealed that Whyte was even offered the private jet he wanted to fly him in and out of London, but then still refused to attend and instead added further demands.

Warren was clearly incredulous at the turn of events, describing Whyte’s conduct as “disgraceful” and “madness”.

Fury though was not angry, and instead he preferred to mock the Brixton slugger instead.

He said: “I’m not concerned because this is the Tyson Fury roadshow and the next stop is London in the United Kingdom. It’s never about the opponent, whether it’s his face on there or somebody else’s. Really unimportant – he’s ugly anyway, we should take him down Frank.

“Like I said when I was fighting Klitschko, there’s only been one man on these shores ever and he goes by the name of Tyson Fury.

A new nickname for Whyte

When asked whether Whyte was unfortunate to be fighting in the same era as him, Fury provided an interesting response.

Finally Fury delivered his most cutting jibe, a new nickname for the ‘Body Snatcher’.

“He has definitely shown the white flag today.”