Skip to content
Fury vs Joshua News Fury: I didn’t care whether Klitschko killed me

Fury: I didn’t care whether Klitschko killed me

Tyson Fury has opened up once again about his mental health problems – admitting he didn’t care whether he lived or died when he fought Wladimir Klitschko for the world heavyweight title back in 2015.

Fury appeared to be on top of the world after a masterful boxing display in Hamburg made him king of the sport’s marquee division. But in reality he was instead approaching rock bottom after a life spent in denial about his mental health issues.

The ‘Gypsy King’ appeared on the ‘The Lockdown Tactics’ podcast  – hosted by Scottish footballers Kris Boyd and Robert Snodgrass – to talk about that night in Hamburg and about coming within seconds of committing suicide the following year – a turning point which eventually led to an incredible comeback story both in and out of the ring.

“I was mentally unwell going into the fight, completely – I didn’t care if Klitschko killed me or not, I wasn’t bothered. I didn’t bother if I lived or died, all I wanted to do was have that fight and then that was it.

“I was very very unwell for a number of years. I’m the same today – one minute I’m happy, the next minute I’m not. I don’t think you can defeat mental health problems, I think once you’ve got them they are with you for ever. But you can maintain and manage them, and that’s what I’ve learned to do over the years.”

The win against Klitschko wasn’t the cure for Fury’s ills, it was just the prelude to a breakdown which almost resulted in the end of Fury’s young life.

He explained: “My darkest moment is I was on the way to committing suicide once – I talk about it in my book – I got this new Ferrari in 2016 and I got in it one day and got up to about 190mph down this road, I was heading towards this bridge at the bottom. I was 100 percent that this was the day I was going to kill myself – I’d thought about it for a long time but never really had that mentality to do it there and then. I thought it was only a matter of time.

“Before I hit it – I come to about 100 metres away from it – I heard a voice speak to me as clear as we are speaking today – saying: ‘don’t do this, you’re gonna destroy everybody’s lives, you’re donna destroy your family’s lives, don’t do it’.

“And you know when people say before you die your life flashes in front of you, that didn’t happen to me. All I could think about was my kids losing their father and growing up without a father and being left alone in life to struggle by themselves. I immediately pulled over and that was my turning point in getting help because I knew I couldn’t do it on my own any more – I needed medical help. I went and got help, and I was getting better every day from then on.”

While Fury didn’t get help for his mental health issues until 2016, he now admits they had always been there.

“I suppose I had them all my life from being a little kid – I felt anxious, I would be up and down. I never really understood it though until I got diagnosed in 2016, until I saw a doctor when I was 27, 28 years old,” he said.

“I thought it was just something that everyone went through and I didn’t understand it. No-one in my family understood mental health issues – it was just like an alien subject. Coming from the family I come from, to say: ‘I’ve got this weakness or that weakness,’ I would be considered as like a weak person. So I didn’t tell anyone about it, I didn’t tell my Dad, I didn’t speak about it, because I thought people would laugh at me.

“Up until ’16 when I had a mental breakdown, I had to come out of it. And it was the best and biggest thing I did in my life, opened up about my mental health problems. To see so many others struggling with the same stuff – I’ve become a mental health ambassador for it – over the years for speaking out in public about it so openly. 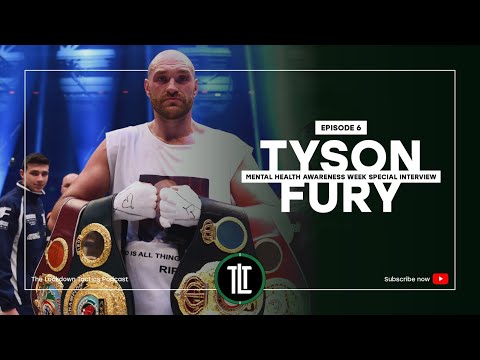 While Fury admitted that it was the thought of his children growing up without a father ultimately saved his life in those moments as he approached that bridge at 190mph, he  also warned that even the support of a strong family unit is not enough to guarantee survival against such a terrible adversary.

“It has a big impact and it still does today, but there’s a point in life where nothing matters, you can be in that deep of a hole where your wife, your kids, your family, nothing matters – you just wanna die. And I’ve been to that place. And that’s the lowest point in life where you can wake up on a daily basis and you wish you’d never woke up, and you don’t see a point in living any more and every day is grey even when the sun is shining. You’re just praying for death – I’ve been there, been there for oh so long.

“That’s the breaking point, you know you’re at rock bottom and the only way you can go from that point is up – that’s for sure. I was in denial for a long time – I didn’t let myself believe that I was mentally unwell.”