Oleksandr Usyk is pondering his next move as free agency beckons for the Ukrainian superstar and world heavyweight title hopeful, and he has spoken at length about his contract situation.

The former cruiserweight king (18-0) is WBO mandatory contender and pushing hard for a shot at the title currently held by Anthony Joshua. He recently cemented that position with a points defeat of Dereck Chisora in London.

Usyk on contract situation with K2

This week he gave a very honest and open interview on his Usyk17 YouTube channel. During the interview he discussed his contractual situation with promotional company K2. He also talked about what the future might hold.

“The first fight took place November 9th, 2013. The first professional fight in Sports Palace. It has been seven years since the contract was signed. The contract is valid for a fixed term of seven years,” said Usyk.

“Due to the contract, the company was responsible for the organisation of a Championship fight within three years, otherwise the contract would expire. And after I got the Championship, the contracts were being extended automatically. It was not extended for a certain period of time, but for the fights. 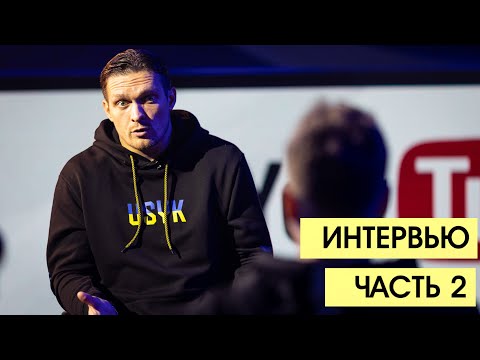 “At the present moment, the contract may not be valid longer than seven years. After the contract is over, the company is given a priority to discuss the possibility for our future co-operation. For example, there is a company offering me $1, for example. And the company I was working with previously offers me $1.5. You see?

“Now I need to communicate with all the K2 participants. Not with one person, with everyone, including those who were present at the initial discussions.”

Usyk says he has no problem with K2 after seven highly successful years working with them. But he also stressed he needs to move in the right direction and also maximise his earning potential. If that is with K2, then that’s the direction he will go.

“What I want is favourable conditions for myself. Because every athlete has a certain period of time in his possession. The time when you can earn. I want to do my best. So that I can develop myself in some other direction.

“If K2 creates better financial conditions, I will continue our contract. I’m in good relationships with K2 in general. K2 fulfilled their commitments and I’ve achieved what I’ve achieved together with them.”

Usyk’s loyalty to K2 comes partly from the faith they showed in him back in 2013. He did speak to other promoters when deciding to turn pro after winning Olympic gold at London 2012. But there were many doubters.

“I remember when I came to Bob Arum, he was not interested at all. Others were not excited either. I remember the first press conference, when I had just signed the contract. The press were sceptical in their expressions as well.”

If Usyk did decide to field offers from other promoters there would surely be no shortage of them. As yet he has not, for very good reason.

“No, I haven’t announced the end of the contract in the English or American press. I think that in case I won’t extend the contract, I may inform that the agent is free, and things will liven up.”

The Usyk17 brand is very much something in Oleksandr’s thoughts now as he looks to the future. Promotion is possible, while he is also in the process of releasing a clothing line. He has very fixed ideas on what he wants to achieve.

“We may hold a boxing night. But we want to implement something new. We want to engage young people, who are unknown yet. You know, when people come to root for somebody, there are only 3 percent who understand what’s going on there. All the rest are just being excited.

“I want to give young people what they need. You know, there is one good fighter, people buy tickets for, and there are five medium-level fighters. All fans are coming and waiting for that one. What we want is to show two, three or four new boxers so that people are becoming aware of them. We want to practise something different.”