Usyk vs Joyce ‘at an impasse’ – Frank Warren

Plans for the eagerly-awaited Oleksandr Usyk vs Joe Joyce heavyweight showdown are at an impasse according to Frank Warren, as negotiations for Tyson Fury vs Anthony Joshua rumble on.

The WBO has ordered Usyk vs Joyce for its interim title and the spot as mandatory challenger for the belt current held by Joshua. If Fury vs Joshua isn’t finalised in a set time period though, the WBO will order Joshua to defend instead against the current mandatory – which is Usyk.

Pretty clear then that former cruiserweight king Usyk (18-0) will not be rushing into a fight with Joyce (12-0) while the slim possibility of going straight to Joshua still exists.

Joyce’s promoter Frank Warren told BT Sport: “We got him in the position, we lobbied the WBO to get him into the position. The WBO called for the fight to be made between Usyk and Joe for the interim title.

“But everything’s at an impasse now. They’ve give a period of time to allow for the Tyson vs AJ fight to take place. If it doesn’t, then they’re going to to tell AJ that he’s gotta make his defence against his mandatory, who is Usyk. 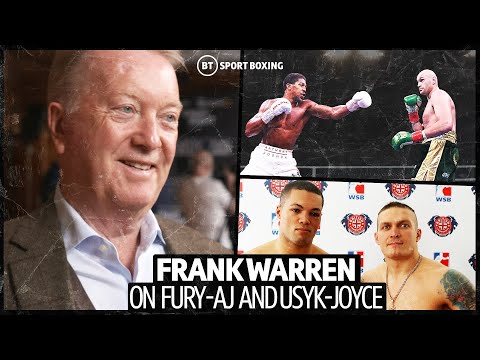 “So Usyk doesn’t want to be getting involved in an interim – he just wants to go straight for the title. So we’re at a little bit of an impasse. Until we get this fight resolved between Tyson and AJ, we are where we are.

“I think that’s going to come to a head fairly soon. We’ve not had an offer that we feel is suitable. We’re awaiting an amended offer and once we get that, then all the interested parties can consider it. We’ve all got a will to make this fight happen, it’s a no-brainer for us to get it on. But it’s when it goes on, where it goes on and a couple of other issues that need to be resolved.

Joyce will be out in June

“Until we get at least a binding deal memo, we are where we are. So unfortunately Joe’s suffering. I wanna get Joe out, he had a good win, I’d have liked him to have fought on Saturday, I’d like to have him out by now. He will be out some time, no doubt about it, in June whatever happens. If it’s Usyk or not, he’ll be out.”

The man Joyce defeated in his last fight – the exciting Daniel Dubois – is also ready to return in a battle for the WBA interim title against Bogdan Dinu on June 5.

Dubois (now 15-1) suffered a fractured eye socket during that shock 10th-round knockout by Joyce, but is now fit again. Warren remains excited by his future prospects, but does admit ‘Dynamite’ will be under massive pressure to bounce back.

“He’s stepping up to the plate. Looking back to the fight he had with Joe Joyce and the terrible injury he sustained, a lot of people had their views on that – conflicting views. Some people thought that he didn’t have the heart, other people thought he did the right thing.

“He’s got a massive pressure on him now. When he comes back, people are gonna be looking at him even more so than he was as an undefeated fighter after how that fight ended.

“But you’ve got to take your hat off to him because it’s a fight he called for, he wanted, and if he comes through it he becomes the mandatory for the WBA heavyweight title. So everything’s at stake for him, it’s not like he stepped backwards. He’s moving forwards and obviously he’s gotta put the performance in and deliver. So there’s a lot of pressure on him for this fight.”