Otto Wallin took another step on the road to what he hopes will eventually be a shot at a world heavyweight title when he outpointed Dominic Breazeale in Uncasville on Saturday night.

The 30-year-old Swede improved to 22-1 in the paid ranks with a unanimous decision over the 35-year-old former two-time world title challenger.

When he stepped into the ring on Saturday night Breazeale’s only two defeats as a pro had been at the highest level – both inside distance against Anthony Joshua and Deontay Wilder. He was also coming off an absence of more than two years since that loss to Wilder back in 2018. 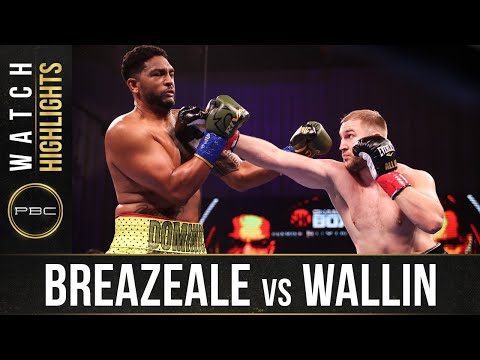 Wallin meanwhile has already proved he can cut it at the top level – quite literally. He opened a horrible gash over the right eye of Tyson Fury in their bloody Las Vegas showdown in September 2019. Some feared the fight would be stopped, but Fury eventually gutted it out to prevail on the scorecards.

Breazeale showed definite signs of ring rust – unsurprising given his long hiatus – and fell behind early on the scorecards. Wallin meanwhile set his stall out to dominate from the start.

The jab was a potent weapon for Wallin all night as he outscored Breazeale by 103 to 37 with that one punch alone. A big left from the southpaw Sweden thudded home in the fifth, Breazeale’s. right eye swelling as a result.

Power shots also saw a comprehensive edge for Wallin, as he outscored Breazeale by 129 to 54 with heavier punches.

While Breazeale never looked in big danger of not hearing the final bell, the result was similarly inevitable. Scorecards were 117-111, 116-112 and 118-110 in favour of Wallin.

And while Dominic may not be the force of old at 35 years of age now, this still rates as the biggest win of the Swede’s career so far.

He said afterwards: “I think I had an advantage because I fought here before. I was more focused this time and I think I came out better than what I did last time (against Travis Kauffman last August).  We knew coming in that I had better footwork, better speed so I wanted to use that. And I have good defense too.

“He hit me here and there but nothing too serious. I said before the fight that I just gotta do what I’m good at and that’s what I tried to do.

“My ultimate goal is to be champion. But I have to keep improving, I’m not there yet. I’ve got a lot of work to do, I’m getting better. I’m not so focused on who I fight, I just want to fight, keep it stepping it up and when I get another shot, I’ll be ready for it.”

Breazeale meanwhile rued his slow start, admitting: “I let the early rounds get away from me. Otto is a good boxer and did a good job of sticking and moving the whole fight.

“I did a little bit too much head-hunting at the start and paid for it on the back-end.”