Wallisch ‘we’re here to f*** up Dubois vs Joyce’

All roads may apparently lead to Daniel Dubois vs Joe Joyce on Saturday October 24, but there are two Germans coming to ‘f*** up’ that plan according to Michael Wallisch.

Wallisch (20-3 with 13 KOs) and fellow German Erik Pfeifer (7-0 with 5 KOs) are the men chosen by Frank Warren’s Queensberry Promotions to face Joyce and Dubois in their interim fights ahead of that planned October 24 showdown at London’s O2 Arena.

While these might be seen by many as tune-up fights (Dubois has not fought since December 2019 and Joyce since July 2019) both Wallisch and Pfeifer are experienced and with enough pedigree to pose a threat to those October plans.

First up is Wallisch, who fights Joyce this Saturday (July 25) live on BT Sport, and he had a very simple message for his opponent at the pre-fight press conference earlier this week.

“My name is Michael Wallish, from Germany, and we come to f*** up the fight,” he said.

“That’s the plan, to ruin the fight between Joyce and Dubois because we are thinking about each of us (Wallisch and Pfeifer) winning then fighting the other guy and then we wanna fight Tyson Fury here in England. Because we love to fight in England, England at the moment is one of the best countries in the world to have boxing fights there. We are bored of Corona (COVID-19) in Germany, so it’s good to fight here, and to have the fight.: 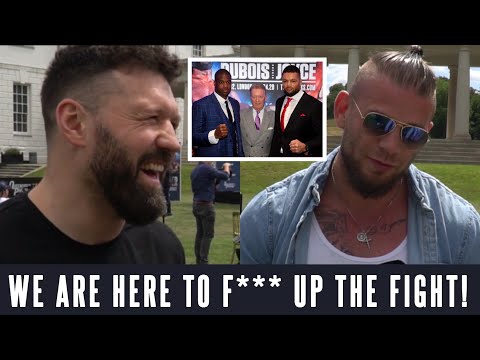 Joyce, after a long and illustrious amateur career, has only had 10 professional fights despite being 34 now, and Wallisch (also 34) says ‘The Juggernaut’ would be very foolish  to see him just as a tune-up fight.

The 33-year-old Pfeifer meanwhile is similar to Joyce in some ways, coming late to the paid ranks after a successful amateur career which included two victories over another highly-touted pro heavyweight prospect – French 2016 Olympic super-heavyweight champion Tony Yoka (7-0 with 6 KOs).

He is booked in to face Dubois on Saturday August 29 (again live on BT Sport) and said: “It’s a big chance for me. I don’t think they make a mistake but I will show myself to the English pubiic. The people will love my style. I am the toughest opponent for Dubois up to now. He hasn’t fought any strong fighters before. I go my way and he’s a stepping stone in my way and I will push him aside.”

Warren meanwhile is under no illusions about the size of the task facing his men against this twin threat from Germany, but is confident they will progress to that big clash at the O2 – hopefully in front of a sellout crowd.

He said: “Daniel hasn’t boxed since December and Joe will have been out for an over year. These fights will sharpen them up and I’m sure they will deliver knockout performances that will get fans even more excited for October. For Erik and Michael it’s a chance to cause huge upsets”

Both Joyce vs Wallisch and Dubois vs Pfeifer will take place behind closed doors at the BT Sport Studios in Stratford, London.