Skip to content
Fury vs Joshua News WATCH: The TRUTH behind Warren vs Tyson bust-up

WATCH: The TRUTH behind Warren vs Tyson bust-up

Frank Warren’s 40-year career in boxing promotion has thrown up some amazing stories, and one of the most notorious concerns a 2000 bust-up with Mike Tyson.

Much has been written about the incident which happened when Warren promoted two Tyson fights in the UK as ‘Iron Mike’ pushed for a world title shot against Lennox Lewis.

All appeared to be sweetness and light when ‘Iron Mike’ destroyed Julius Francis inside two rounds in Manchester in January 2000. But already the seeds for the bust-up were there, specifically some jewellery Tyson had bought during his visit.

Warren explained how the story unfolded in a new BT Sport documentary, ‘Make It Or Die Trying: The Frank Warren Story’, which premieres on Sunday night (April 11). 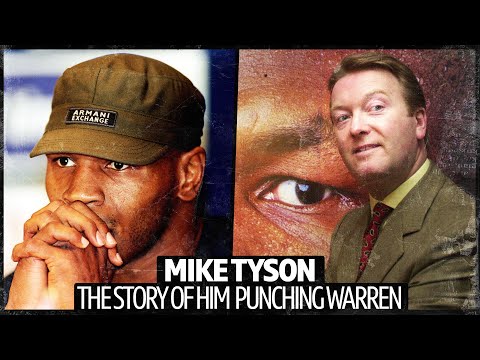 “Day before the fight Shelley Finkel comes down and says ‘look Frank, he ain’t gonna fight’, and I said ‘what you talking about?’.

“He puts all this jewellery down. He said ‘he thought you was buying it’. I said ‘are you mental, what on earth would I paying out that for’.”

The Francis fight duly went ahead, but when Tyson returned to the UK six months later to fight Lou Savarese in Glasgow, the jewellery issue remained and it was about to get physical.

Warren said: “I was a bit silly what I did here. I went up to his room and in the room he’s got him, Tommy Brooks his trainer, really nice bloke, and a couple of other blokes.

“And he starts ranting ‘Don King treated me better than this’. And I hadn’t even got to saying ‘what the’ and suddenly crash, he’s hit me with a left hook right on the chin just out the blue.

“So here’s the guy who’s gonna fight for a world heavyweight title and there’s me, I must be God knows how much older and lighter than him, bosh he’s hit me and I’ve gone over, I didn’t expect it anyway.

“I got up, and then it was all pandemonium in the room and all sorts of things were going on. It was all over the place. And there’s all these stories all circulating afterwards about what happened, but I was there, I know better than anybody what happened.

“I had his preacher, lovely man he was,  he come to me and he said ‘look you can promote him for life’ because they were terrified that he would go back to prison.

“I just said ‘I ain’t giving him a sixpence, you ain’t getting any money out of me. That’s where I’m at.

“You want to pay him, you can pay him what you like, that’s your business. And he’s paying for that jewellery, and that is all that’s gonna happen. And that’s what happened.”

Now of course Warren remains one of the biggest names in the fight game, as co-promoter to WBC, Ring magazine and lineal heavyweight champion Tyson Fury.

Warren will be one of the central characters in an upcoming boxing epic, that unification match between Fury and Anthony Joshua.

It is hoped a venue and date will be announced imminently with the fight likely to happen in the Middle East in July.