Eddie Hearn is expecting “a brutal war” when Dillian Whyte vs Alexander Povetkin takes place on at Matchroom Fight Camp on Saturday night.

Hearn is predicting fireworks when ‘The Body Snatcher’ (27-1) puts his WBC interim title on the line against the veteran Russian and former WBA heavyweight king (35-2-1).

The bout is the biggest to take place since boxing began to tiptoe its way out of the COVID-19 lockdown, and will take place behind closed doors and air live on Sky Sports Box Office pay-per-view (price £19.95) in the UK and DAZN in a further nine markets (United States, Canada, Germany, Japan, Brazil, Italy, Spain, Austria and Switzerland).

For Whyte it represents a huge night and a massive risk – he has been the WBC’s mandatory contender for more than 1000 days now and the sanctioning body says he will finally get his title shot against the winner of Tyson Fury vs Deontay Wilder 3, should he prevail.

“And now he’s number one when he’s fighting Alexander Povetkin – it’s a hell of a run. He boxed Mariusz Wach in the middle  but that was a keep-busy fight. 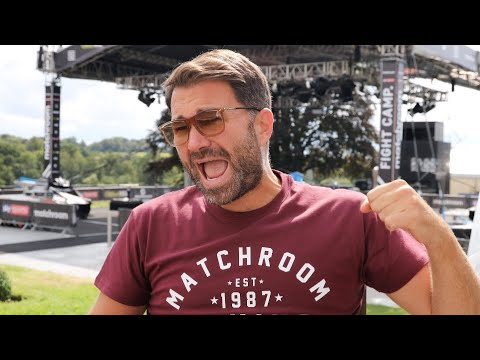 “But that’s why people love Dillian Whyte. When you think about it – look at the fights Dillian Whyte has headlined on pay-per-view. Joseph Parker, Chisora 2 and Oscar Rivas. Three f***ing absolute wars. You know what you’re gonna get with Whyte against Povetkin. You’re gonna get a brutal war.”

Hearn also updated on his elaborate plan to keep Whyte and Povetkin apart in the bubble ahead of Saturday night’s showdown. The Russian will stay in the allocated hotel while Whyte will have alternative accommodation, effectively in the car park.

WinnebaGO 😯😅@DillianWhyte has brought his own wolf's den to #FightCamp. Enter at your peril… 🐺

“I’ve ordered two Winnebagos – I suppose they’re called motorhomes – two of them. So they’ll be bolted on to the hotel, in the bubble. They’re not both in them, Povetkin’s in the hotel. One’s for cooking, one’s for sleeping and chilling out.”

To add further spice to an already explosive bill, IBF, WBA and WBO world heavyweight champion Anthony Joshua is expected to be on hand. He of course handed Whyte his only professional loss to date with a seventh-round stoppage back in December 2015 and the continuing beef between the pair is strong.