Frank Warren has questioned the wisdom of Dillian Whyte rushing into an immediate rematch with Alexander Povetkin later this year following that stunning defeat by the Russian on Saturday night.

The Queensberry Promotions supremo says Whyte would be “crazy” to go straight back in with Povetkin in November or December after being brutally stopped inside five rounds at Matchroom Fight Camp.

Warren told BT Sport: “Even now they’re advising him to be back in the ring in November. This guy got seriously knocked out – oxygen and everything. The Board of Control, normally it’s at least 28-30 days before you can get back in, that type of knockout is normally 40 days. Why would you want to be putting him in the ring if you cared about him?

“I’m sure he wants to do it, but everybody around him should be saying ‘hold on a minute, you shouldn’t be doing that, your health’s what matters’.

“In their mind I know where they’re coming from. They think if he beats Povetkin it’s back to how it was. But it won’t, he’s lost that position as mandatory and the WBC said Povetkin is a year’s time. So even if he beat Povetkin, it’s a year’s time.

“So he don’t need to be rushing into anything at the moment, it would be crazy for him to do it. And the knockout for me was always an accident waiting to happen. He’s very brave, he’s been involved in some really exciting fights because he gets caught.”

As well as questioning the wisdom of a rematch, Warren also said he was surprised Whyte and his promoter Eddie Hearn went for the Povetkin fight in the first place, with ‘The Body Snatcher’ sitting pretty as mandatory contender for the WBC world heavyweight title.

He added: “It looked like was in control of the fight, he put Povetkin down a couple of times. But Povetkin is a wily old character and has massive experience. He’s an Olympian, 40 years of age, but not like he’s somebody who’s got loads of miles on the clock.

“I didn’t think it was a smart move to make that fight for them, He was the mandatory, what was it all about? I didn’t get that, I don’t know who was advising him to that, I just don’t understand where Dillian Whyte is. 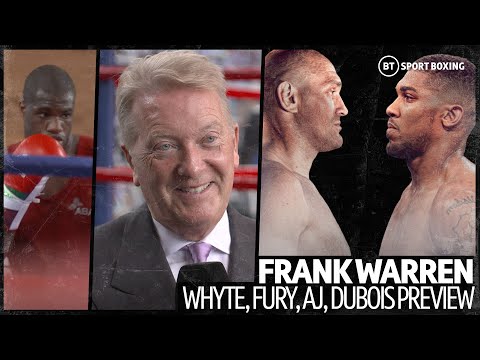 In recent days Tyson Fury said he views heavyweights like Whyte as being on a lower level than he is, a point Warren was quick to back up.

“You seen him (Whyte) on the floor a few times, he had life and death twice with Dereck Chisora. The first fight I though Dereck actually won it although he got the decision, Dillian. The second fight he was behind and pulled it out of the bag with a tremendous finish, and stopped Chisora.

“I look at what Tyson did against Chisora – Dereck never won a second of any round. I pulled him out, should have got pulled out a couple of rounds before.

“So it’s levels, as Tyson said in his interview at the weekend. It’s crazy when I look at what he’s done and where he is at now. He might have earned a few quid from the fights he’s in, but it’s nothing compared to what he could have got if he’d waited, and took his time, and took his opportunities when he was number 1 at the WBO and when he was mandatory to Tyson.

“He should have sat back and made it happen.”