The pair are due to meet later this year – hopefully on Saturday December 19 – with Fury’s WBC, Ring magazine and lineal heavyweight titles on the line.

But after the way Fury demolished Wilder in their rematch in February (seventh-round TKO) many people were surprised by the speed with which the latter exercised his contractual right to a third meeting.

Lee – who along with Javan ‘SugarHill’ Steward trained Fury for the first time in the Las Vegas rematch – spoke to Boxing Social about what is still the biggest fight in boxing for the rest of 2020.

He said: “I think it’s a lot harder sell (the third fight), isn’t it, for the people in general. It was so emphatic, the way in which Tyson went about his business and the way in which he beat him. It’s hard to see Deontay being able to adjust and make changes so drastic to overturn that performance or that outcome.

“Tyson won’t be underestimating him, because he’ll know that with any one punch it still comes crumbling down. Tyson just has to do what he did again, but better. Because there’s still a lot of room for Tyson to improve and a lot of the things that we did, we’re only just scratching the surface, so that’s what he’ll do.

“He’s (Wilder) still a very dangerous man, one loss doesn’t make you a bad fighter in boxing. Before the fight with Tyson, everyone was making him out to be the biggest puncher, he was the favourite going into the fight. And now, since Tyson what he did, it’s like ‘oh yeah, he was always gonna do that’.

“Everything’s 20-20 in hindsight in boxing. And boxing opinionators are so feeble you know. All lauding the gameplan when before the fight they were saying it was a crazy approach.” 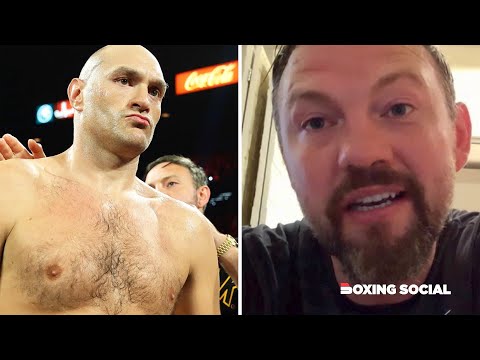 While Fury’s co-promoter Bob Arum remains “somewhat optimistic” Fury vs Wilder 3 can still happen on December 19 despite the fact the COVID-19 pandemic continues to cause global carnage, he has admitted that moving the bout to Asia in early February 2021 is a possiblity.

Lee says while Fury is “buzzing” and clearly in great shape as he trains regularly, he is also champing at the bit to get back into action.

He revealed: “He’s in good form, you can see he’s buzzing. He’s loving life. I’m not sure (when he will fight again), he doesn’t know, I don’t think anyone knows when he’ll fight again, for certain there’s lots of dates being bandied around.

“It’s difficult because fighters of his stature, they need a live gate because of the revenue that’s involved. He’s training all the time – three or four times a day sometimes. As much as it’s uncertain for fighters on the lower level, the fighters at the higher level as well, it’s hard for them too. It’s not hard, but they can’t operate or fight – I know it’s all about money and paydays but these guys do want to fight. Tyson wants to fight, he doesn’t want to wait around and fight once year. He wants to be busy and be active. Yeah, it’s a difficult time for him.”

Fury has often said that the routine of training and the positive impact of it is a massive weapon in his constant battle with mental health issues. Lee says at this stage his only fear is the potential for overtraining.

“I think from spending time in Vegas with him for the camp (Fury vs Wilder 2), he knows he’s got to train all the time, that’s his medicine, it keeps him on the level. My concern would be the opposite, that he’s training too much, that he needs a rest.

“It will be good because when we do go into training camp he won’t have to work on his fitness, so we can just pick up where we left off and still work on the technique and the gameplan. Sometimes you can do too much and be overtrained so that’s more of a concern I would say than not training.”

Lee of course looked on with interest when the announcement was made on June 10 that Fury and Anthony Joshua have agreed in principle the financial structure for a two-fight deal, with the first bout potentially in the summer of 2021. While he says it really brought nothing new to the table, it was a positive sign.

“I think it’s a good thing that there’s the intention or the want to fight each other, but I think that was always there. I think the fights that have to happen now, he (Fury) has to finish his business with Wilder and then Anthony Joshua is the last fight. Well not his last fight, but the last fight and then he can just go on a world tour doing wrestling matches, exhibitions and singing karaoke!”