Anthony Joshua has told Tyson Fury their megafight needs to happen – and soon – to decide who is the dominant figure in the heavyweight division.

A fight between the two would be the biggest all-British fight in living memory and would likely smash all domestic records for both live gate and PPV buys.

Joshua had been slated to defend his titles against Bulgarian and IBF mandatory challenger Kubrat Pulev at Tottenham Hotspur Stadium in London on Saturday June 20. But the global spread of the COVID-19 pandemic led to the bout being postponed.

AJ, who regained his titles with a points victory over American Andy Ruiz Jr in Saudi Arabia last December, says a fight with Fury has to happen.

Speaking to Sky Sports, he told Fury: “Come fight me. If you really want to say you’re No 1, come fight me. Let’s get it on. I’ve got the rest of the belts so it only makes sense.

“I’m the unified heavyweight champion of the world, he’s the WBC champion. What it will prove, me and him fighting? There will be one dominant figure in the heavyweight division that will have all of the belts and become undisputed. Logically to prove yourself as No 1, I have to fight Tyson Fury. He has to fight Anthony Joshua.” 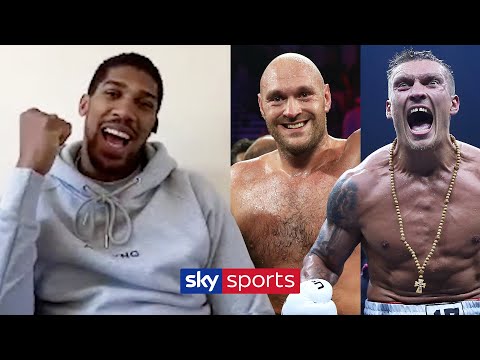 Joshua potentially has a rescheduled date with Pulev next and Fury is contractually obliged to a third fight with former WBC king Deontay Wilder – currently scheduled for October 3. But AJ hinted that he’d love a showdown with Fury to come first.

Joshua said: “It would be amazing to tell Pulev ‘I think it’s best if you step aside for now’ and to tell Wilder ‘we have bigger fish to fry’. Enjoy your Alabama chicken while we get cracking in the UK!’

“That fight needs to happen because there will never be another time like this again.”