Boxing is not just about the UK or the US, and streaming platform DAZN has highlighted the huge popularity enjoyed by Anthony Joshua in Nigeria as it looks to achieve world domination.

The IBF, WBA and WBO heavyweight champion was at the centre of DAZN’s big global rollout to more than 200 countries when he defeated Kubrat Pulev on Saturday night.

AJ’s bouts have aired on DAZN for a number of years now, and he has been a mainstay of the platform in the United States since the brand launched there in 2018.

The Pulev bout did not air on DAZN in the UK due to the fighter’s existing deal with Sky Sports, but it did pretty much everywhere else as DAZN looks to rack up a huge global subscriber base.

Fury vs Joshua a global event

As the clamour for a Tyson Fury vs Joshua superfight reaches fever pitch, DAZN EVP Joe Markowski explained why AJ and this fight are such a big draw everywhere.

Joshua, born in Watford of Nigerian parents, is seen by many in the African nation as one of their own and Markowski made specific mention of his popularity there. 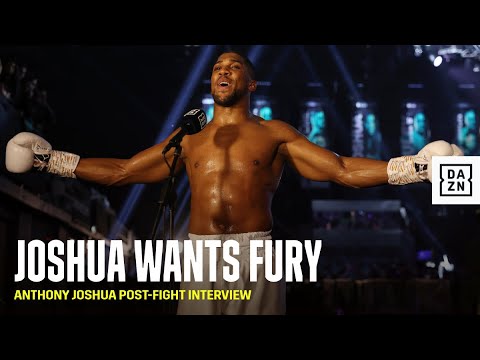 “It’s a huge fight globally. Both fighters have legions of followers in the UK and across the Atlantic, as well as in European countries like Germany and Ireland. And don’t forget, AJ is huge in Nigeria.

“It’s been a long time coming and if both men eventually enter the ring and determine who is the number one heavyweight in the world, fight fans around the world will be glued to their screens. “

Joshua’s popularity on a global level is unquestioned. His rematch win over Andy Ruiz Jr in 2019 reportedly smashed Sky Sports Box Office records with 1.6million UK buys at £24.95 each. Markowski says that popularity has already translated into many other markets for DAZN.

He explained: “AJ is a big part of DAZN. His rematch against Andy Ruiz Jr in 2019 was the most streamed event of the year on DAZN, bigger than the UEFA Champions League Final which we show in Germany, Austria, Switzerland, Japan and Canada – just to give you a sense of how big boxing already is on DAZN.

“It’s (Fury vs Joshua) a massive fight. Any time there is a fight with global appeal, it will be appealing to a global broadcaster. But nothing to say beyond that at the moment.”