DAZN (pronouced ‘da zone’) continues its march towards global domination of boxing on TV by signing Anthony Joshua to a massive deal to stream his fights in the hugely influential UK market as well as other territories around the world.

The deal, announced on June 13, 2022, meant AJ ended his long and successful association with Sky Sports to go all in with DAZN. His bouts had already aired on the ‘Netflix of Sports’ outside the UK for a number of years.

The AJ deal was just the latest huge splash by DAZN, which had already signed his promoter Eddie Hearn and Matchroom Boxing to a massive global contract in 2021. In a baffling twist though that AJ deal DID NOT kick in until after the Oleksandr Usyk vs Joshua 2 rematch in Saudi Arabia in August 2022. That instead aired on Sky in the UK with DAZN having US rights.

AJ is now likely to be out again in early 2023 against an unnamed opponent but we definitely know it won’t be that all-British blockbuster vs Tyson Fury (insert crying face emoji).

DAZN has a lot of glitzy baubles in its boxing arsenal – throw in the partnerships with P4P king Saul ‘Canelo’ Alvarez, Gennadiy ‘GGG’ Golovkin, Katie Taylor et al and it is easy to see why it is THE major player in boxing broadcasting right now.

DAZN also narrowly failed in a bid to buy another British broadcast network in the shape of BT Sport – with a price tag of ‘hundreds of millions of pounds’. Any deal would have given DAZN Premier League football rights in the UK, and access to Fury fights (Frank Warren’s Queensberry Promotions is contracted to BT Sport).

DAZN has been live since 2016 when it launched in Germany and Japan, and it rolled out in the United States in 2018 with Joshua at the centre of its offering.

A $1billion eight-year deal with Hearn and Matchroom in the U.S. kicked things off, followed by an eye-popping $365million pact with ‘Canelo’. Gennadiy ‘GGG’ Golovkin would soon follow too.

The partnership with Alvarez went sour in the second half of 2020 and resulted in the Mexican megastar taking DAZN and his promoter – Oscar De La Hoya’s Golden Boy Promotions – to court. The saga ended on November 6 when ‘Canelo’ released a statement proclaiming he was now a free agent.

Canelo, though no longer on that long-term DAZN deal, made a quick return to the platform and he is set to face Golovkin in a long-awaited trilogy fight on September 17, 2022.

We also had another DAZN blockbuster in the meantime with Katie Taylor vs Amanda Serrano at Madision Square Garden on April 30 – the biggest bout in women’s boxing history. It did not disappoint…

It is not all plain sailing for the ‘Netflix of sports’ though – the business lost around £3billion combined in 2019 and 2020 – and some experts wonder how it will ever get somewhere near profitability.

Blavatnik did agree a recapitalisation worth $4.3billion recently which means the company is now debt-free, but it still faces significant challenges moving forward.

DAZN: What is it and how did it come about?

DAZN was the brainchild of Simon Denyer, then CEO of UK-based Perform Group. The company – owned by Blavatnik’s Access Industries – had long held the view that there was a gap in the market for a sports OTT (over-the-top) streaming service. One with an affordable monthly subscription and no long-term contract.

The service launched in Germany (together with Austria and Switzerland) and Japan in the summer of 2016, to positive reviews. The rights portfolio in Germany was particularly strong, including major football competitions such as the English Premier League (EPL), Spain’s LaLiga and Italy’s Serie A. Japan meanwhile launched on the back of a landmark 10-year $2billion deal with the domestic J League.

The United States followed two years later to a huge fanfare, with the focus this time on building a subscription audience through fight sports – predominantly boxing. The service there launched with Anthony Joshua’s world heavyweight title defence against Russian Alexander Povetkin in September 2018. 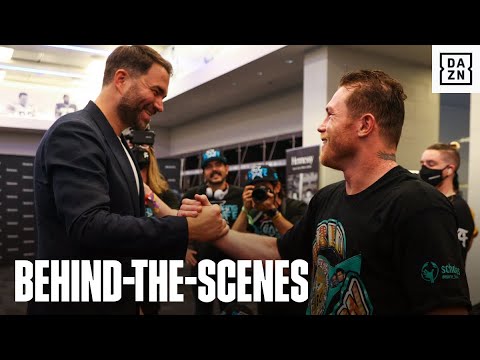 The agreement with Hearn’s Matchroom started a spending spree which culminated in the huge deals to land Canelo and Golovkin, with a view to matching them together in a lucrative trilogy fight. That has still yet to happen.

Other markets launched in the shape of Canada, Italy, Brazil and Spain – along with flurry of major rights acquisitions.

DAZN launched in the UK and more than 200 other markets on December 1, 2020. The UK price was initially £1.99 per month and early attractions included marquee fights involving ‘Canelo’ and ‘GGG’.

The platform launched in the United States with a subscription price of $9.99 per month with no fixed contract. It positioned itself as a staunch opponent of pay-per-view with its high one-off costs (some fights previously in the United States had been priced at as much as $99, notably Floyd Mayweather Jr vs Manny Pacquiao in May 2015).

However DAZN announced in March 2019 – less than a year after launch in the United States – that it was upping the cost of a monthly subscription to $19.99. Subscribers could still however purchase a 12-month subscription for $99.99 (an average of just over $8 per month).

Even that price is going up now – from May 2 (just in time for Canelo vs Bivol) the price of an annual sub in the United States will be $149.99.

Other DAZN markets have different models – with Germany for example charging €119.99 per year for an annual subscription or €11.99 per month.

The global launch came with a subscription price of £1.99 per month or less in the 200-plus new markets, including in the UK – but that was swiftly ramped up following the global alliance with Hearn and Matchroom. The new UK price is £7.99 per month.

The signing of Joshua will increase speculation that DAZN may now roll out a PPV platform in the UK, as it has recently in the United States.

Like we said, Eddie Hearn’s boast that PPV is dead is no more. It’s here on DAZN – in both the UK and the US.

Next off the rank for DAZN PPV is the Floyd Mayweather Jr vs Deji exhibition bout – which takes place in Dubai on Sunday November 13. The cost is $14.99 (plus a monthly sub) in the U.S. and £16.99 in the UK.

The DAZN app is available via a number of sources, including iOS via Apple and on Android via the Google Play Store.

As already detailed, DAZN spent fortunes in its early days in the United States signing up fighters to lucrative contracts with a view to making big fights and building a valuable subscription audience through live sport. Its current stable is underpinned by partnerships with Hearn’s Matchroom and De La Hoya’s Golden Boy Promotions.

Some of its major stars include:

Saul ‘Canelo’ Alvarez: Mexican P4P king who has spent the last two years cementing his position as not only the best fighter in the sport, but its biggest box-office attraction. Unified the super-middleweight division in 2020 and 2021 with terrific wins over Callum Smith, Billy Joe Saunders and Caleb Plant. A defeat by Bivol at light-heavyweight was an upset, and next he steps back down to 168lbs for that eagerly-awaited trilogy fight vs Golovkin.

Anthony Joshua: Joshua decided in June 2022 to all in with DAZN after signing a deal to end his long-term partnership with Sky Sports in the UK market. His bouts had already aired on DAZN outside the UK for a number of years. The two-time heavyweight king is expected to rematch Oleksandr Usyk in Saudi Arabia in August in a bid to win back the IBF, WBA and WBO titles he lost to the Ukrainian in September 2021.

Gennady ‘GGG’ Golovkin: ‘GGG’ signed a lucrative DAZN deal to follow up the platform’s capture of ‘Canelo’. Having drawn one and lost one of their two meetings so far – both in controversial circumstances – it seemed like the sensible move and the only way to have a chance of finally getting his revenge. That chance, at long last, will finally arrive on September 17.

DAZN also attempted to boost its subscription base by matching high-profile YouTubers KSI and Logan Paul in their rematch at Staples Center in Los Angeles in November 2019. The bout was criticised in some quarters by hardcore boxing fans, with the undercard including world champions such as Billy Joe Saunders and Devin Haney. KSI is now back on DAZN as he looks once again to make a ton of dollars from PPV boxing.

It has also in more recent times put a focus on archive content and evergreen documentaries. Its app contains a good back catalogue of Golden Boy fights in particular – including De La Hoya’s.

When DAZN launched in the United States for Anthony Joshua’s world-title defence against Alexander Povetkin in September 2018, it offered users a 30-day free trial.

However there is no free trial in place at the moment and we will update this article with details of any DAZN offers which are available. As well as changes to any of its products and services.

Of course DAZN is different to most pay-TV operators or streaming services in that there is no need to take on a contract if plumping for the monthly option – you can cancel your subscription any time.

DAZN employs a big workforce around the globe in a number of locations – including London, New York, Amsterdam and particularly in Leeds in the north of England, UK.

The Leeds hub was set up after DAZN took a 15-year lease on a facility outside of the city centre at White Rose Office Park.

DAZN normally has a wide variety of roles available for people looking to work for it, and the latest DAZN career opportunities are available on the platform’s corporate website.

As already detailed, Ukrainian billionaire Len Blavatnik and his Access Industries is the main backer of DAZN (former Perform Group).

Denyer meanwhile headed up the business as CEO until his recent departure in June 2020. Perform/DAZN mainstay James Rushton is now the acting CEO.

John Skipper, former President of ESPN, was hired by DAZN as its Executive Chairman in the summer of 2018 to head up its expansion into the US market.

Ed McCarthy meanwhile made the recent move from Access to DAZN to become its Chief Operating Officer.

On September 22, 2020 DAZN announced that it had sold a majority stake in its football portals (Goal, Spox and Voetbalzone) to Integrated Media Company, which is backed by US private equity giant TPG Capital. The deal reportedly valued the three brands at more than $100million (£79million).

DAZN later completed the sale of US media brand Sporting News – once known as ‘The Bible Of Baseball’ – to Pax Holdings in December 2020. The value of the deal was not disclosed.

The initial Perform had also owned a highly-profitable Watch & Bet product (selling betting broadcast rights in to bookmakers) as well as football stats market leader OPTA and other B2B services.

However much of that B2B arm was jettisoned in April 2019 when DAZN sold its content business to US sports data leader STATS. The deal – funded by backing from Vista Equity Partners – saw DAZN retain a minority stake in the new business, known as STATS Perform.

How much is PPV on DAZN?

As of now the plan is only for PPV in the U.S. and Canada. Canelo vs Bivol was $59.99 for existing DAZN subscribers and $79.99 for new subscribers.

How much is DAZN a month?