Anthony Joshua loves fighting so much, he cannot even begin to contemplate retirement.

The reigning IBF, WBA and WBO world heavyweight champion (24-1) will turn 32 in October and just before that is booked to defend his belts against Oleksandr Usyk on Saturday September 25.

That huge showdown in front of a sellout crowd of 60,000 at Tottenham Hotspur Stadium could, we hope, be the final stepping stone to that elusive unification match with fellow British world champion Tyson Fury. Fury himself meets Deontay Wilder in their trilogy fight on October 9.

Joshua on boxing, and what comes next

Neville talked about how he prepared for retirement by doing media work and starting to build a business outside of football. He also stressed he did not want to play anywhere else after United – not wanting to drop down a level.

AJ though had a very different view – his passion and love for the sport are such that he says he’ll carry on fighting for a long long time yet. At a high level or not.

Not about level, it’s about love – Joshua 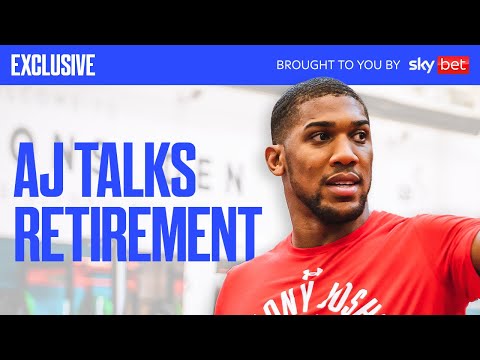 When asked if he would continue fighting on the downside of his career as it were, AJ’s answer was simple – “yeah I would”.

“What about if you said this aint not about where I’m at, this is just about my love, I just wanna play.”

While AJ says he has no idea what his career will look like once he eventually does hang up his gloves, he is already building quite the empire. He has a management company and a string of endorsement deals with blue-chip brands.