Picking the winner of Anthony Joshua vs Oleksandr Usyk is difficult enough, but there is another burning question which will come hot on the heels of that superfight – will Joshua stay with Sky Sports?

The bout will be broadcast live on pay-per-view by Sky Sports Box Office in the UK, while DAZN will stream it elsewhere – including the United States. Those two are expected to lead the race for Joshua’s next UK deal.

Former world champion and pundit Johnny Nelson was asked about the situation in an interview with IFL TV as fight week intensifies in London, and while he doesn’t know the outcome he has total confidence that the team around AJ will make the right call. 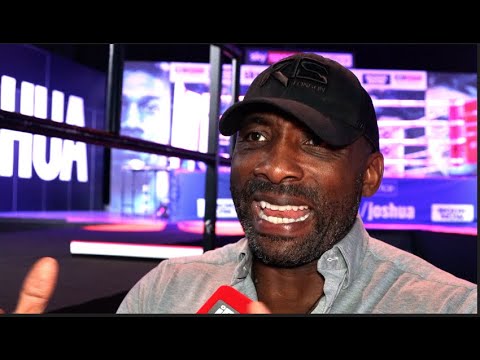 “I don’t know the ins and outs of that, but I’m quite sure they’ve not made any mistakes so far in regards to the choices they’ve made and the moves, decisions they’ve made. Look at what they’ve done with AJ – remember his team that was around him from the off. People looked and thought ‘what’s he got these people here for?’. They’ve done an amazing job with him.

“They’ll make the right decision for him, regardless of it’s with DAZN, or Sky or anybody else.”

Joshua (24-1) will start favourite against the WBO mandatory contender Usyk (18-0) on Saturday night. But he is not the normal long odds-on which comes with most of his title defences. This is a proper fight, and Nelson says it is no foregone conclusion.

“I’m very concerned (for Joshua). There’s a professionalism from both fighters that tells me it’s the calm before the storm.

“Usyk’s so so confident and I’ve met nearly every one of Joshua’s opponents – they’ll talk a big fight, make all the noise, they’ll talk the talk but they can’t walk the walk.

“This guy is very matter of fact about it, very cool about it, he’s come over with a mad team – you don’t do that if you’re coming over to play second fiddle.

“This isn’t a given, this is a mandatory defence – he’s saying ‘bring it on’, he could have easily given up the WBO. He doesn’t have to do this, he could have given it up.

“He’s gone in there because if you fight and you believe you’re the best, it doesn’t matter if nobody else believes it, as long as you believe it then you’ll fight the best. That’s the responsibility of a champion.”