The 30-year-old self-styled ‘Savage’ met the 33-year-old Little on the Nigel Benn vs Sebastian Formella undercard. And he continued to build a cult following with another display to excite the watching fans on Sky Sports and DAZN.

Babic fights at an incredible pace, winging punches from all angles. You have to wonder whether he could manage the same pace over 10 or 12 rounds. But so far he hasn’t needed to.

Alen was on top in the first two rounds as Little (now 10-9) tried manfully to stem the tide of shots coming at him from all angles.

But two knockdowns late in round three – both after powerful flurries – saw the stoppage come just before the scheduled end of the session.

6 KO's from 6 fights, Alen 'The Savage' Babic does it again!

Babic – whose mentor Dillian Whyte said could easily dominate at cruiserweight if he wanted to – now has six wins inside distance.

‘Bomber’ gave his verdict via Twitter, saying: “Babic is just relentless! Didn’t stop.. you cannot keep that pace for 12 rounds at that weight but I’ll tell you something he’s GOLD to watch! Follow him people cos his journey will be brilliant and exciting to follow!”

Leading trainer Dave Coldwell was also enthused by the performance from ‘The Savage’, remarking: “Babic is a great character, fun to watch, but I can’t see him doing this against the higher levels of the division. But as I said he’s fun to watch so I’ll enjoy the ride while it lasts!”

Leading light-middleweight prospect Anthony Fowler is another Babic fan, waxing lyrical about the Croatian’s crowd-pleasing style. He said: “Babic is great I love the fella, he’s game as but when he meets a proper heavyweight who’s well schooled and ambitious he will come unstuck IMO, I’m enjoying his journey though.” 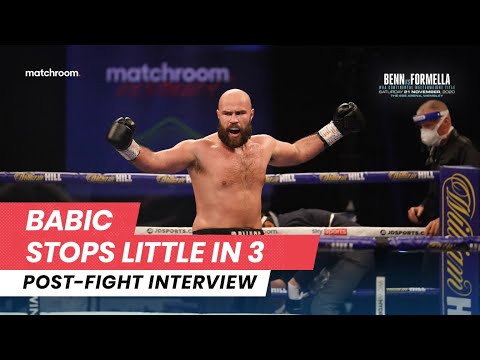 “As soon as the fans get back, I want him. I want to do a number on him,” said Babic.