Chisora vs Parker PPV confirmed for May 1

Dereck Chisora vs Joseph Parker will top a blockbuster Matchroom PPV bill on Saturday May 1.

The big heavyweight match-up is the main event on a card which also includes a sensational women’s world-title showdown as Katie Taylor clashes with Natasha Jonas. The show will air live on Sky Sports Box Office pay-per-view in the UK, and on DAZN in the United States and around the world in more than 200 countries.

Parker subsequently split with long-time coach Kevin Barry in the aftermath, and will now have Andy Lee heading up his corner. Lee of course was part of the team which masterminded Tyson Fury’s demolition of Deontay Wilder in February 2020.

He said: “I’m excited to start this new chapter in my career with a new coach and some fresh ideas. I’ve settled in and Andy and I are bonding well. Chisora and I have unfinished business and inside the ring one of us will get the job done.

“I am well aware that a win on British soil and on worldwide television will put me in pole position whereas a loss will be catastrophic.  I am more than up for the challenge. Bring it on Del Boy.”

Chisora (32-10) remains a stiff test for any heavyweight, and gave Oleksandr Usyk a stern examination in his last outing in October 2020. Now he says there is unfinished business with Parker.

“We’ve been here before, in 2019 I flew to Vegas to film the ‘Face To Face’ with Parker, I called Haye as soon as I left and told him, ‘This guy isn’t going to get in the ring with me’, I could see the fear in his eyes. 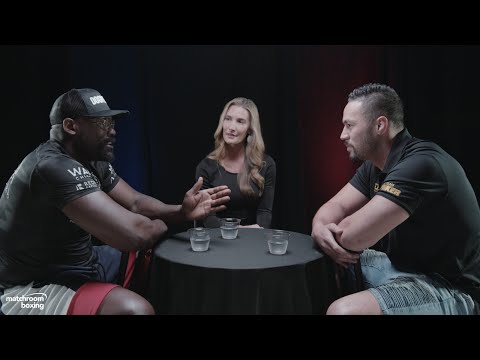 “Now, second time around I hope he fights, I’m looking forward to the fight, I cannot wait to get back in the ring! I love fighting, it is what I love the most. Good luck to Joseph Parker and his new team, we shall see you for WAR on May 1!”

Promoter Eddie Hearn meanwhile is excited by the prospect of what is shaping up to be a sensational card.

“This is one of the strongest shows we’ve promoted and there is still even more to come.

“Chisora vs. Parker is a brilliant style match-up that has been brewing for years and Taylor vs. Jonas is one of the biggest fights in women’s boxing. The Eubanks are always box office and it’s a massive chance for Marcus Morrison after his brilliant win in Italy.

“Craig Richards goes for world title glory against the brilliant Russian Dmitry Bivol and there are further announcements to follow. Buckle up and enjoy this one!”