Eddie (Edward John) Hearn is quite simply one of the most successful promoters in world boxing today after building an impressive global empire.

The 41-year-old from Essex is the son of powerful sports promoter Barry Hearn OBE. He is already though well on the way to emulating his brilliant father. Indeed he replaced him as Chairman of the overall Matchroom Group in April 2021 with Barry moving aside to become President in an advisory capacity.

Eddie – born on June 8, 1979 in Dagenham, Essex – was already the head of Matchroom Boxing. This is a highly successful division of the overall Matchroom Sport group.

In recent years Hearn has also set up Matchroom Boxing USA LLC as he looks to increase his influence on boxing Stateside. So far it has been another successful venture for the Essex business behemoth.

As well as his domination of boxing domestically, Hearn is also a big influence in other areas. Matchroom has been a massive factor in the incredible popularity of pro darts in recent years. Eddie is a director of the hugely successful Professional Darts Corporation.

The Matchroom empire – started in 1982 by Barry – grew to real prominence during that decade as it drove the huge growth in popularity and TV audiences for snooker on the back of world champion Steve Davis. Other sports it has had success with from a broadcast perspective include fishing. It seems there is nothing the Hearns cannot make into must-see TV.

Eddie Hearn’s school days gave little hint of the staggering success which was to follow. He failed his GCSEs at Brentwood High School, ruining his chances of getting into the sixth form. Instead he would end up at Havering Sixth Form College. He took on A Levels in Business Studies, Physical Education and Media Studies.

Academic struggles though were no barrier to a man who has displayed a next-level work ethic and promotional skills to prove a worthy successor to his father.

Eddie did try his hand at boxing for a brief spell. Legend has it he took part in an amateur fight in Essex under the assumed name of Eddie Hills (he feared the family name might motivate his opponent even more to give him a beating!).

The art of sales and the deal is often a God-given talent, but Hearn learned the hard way too. He spent his nights after college doing telesales for a double glazing company in Romford, Essex. A grounding he admits was tough, but hugely valuable experience later in life.

Since then it has been an incredible success story for Eddie. He soon he secured a role with sports agency LEA, giving him the opportunity to work with a number of high-profile clients including English cricket legend Sir Ian Botham. This gave him a great grounding in the world of sports management and promotion.

It was inevitable that Eddie would return to the family business, and after heading up Matchroom Golf he then helped mastermind the company’s move into and domination of poker coverage.

The story though was still only just beginning, and it was boxing that would really move Eddie into the big-time. His father had promoted the likes of Frank Bruno and Chris Eubank in the 1980s, but the younger Hearn is on track to surpass those lofty achievements. 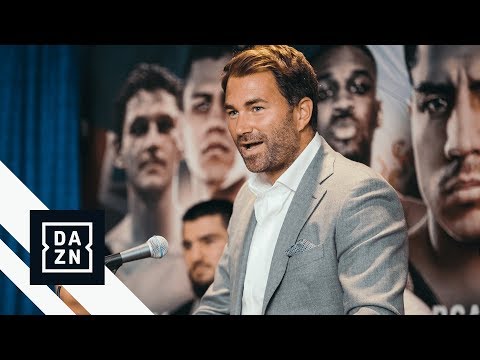 He has promoted some of the biggest fights of recent years, including Anthony Joshua vs Wladimir Klitschko in front of 90.000 at Wembley Stadium 2017. His first really enormous show came when British super-middleweights Carl Froch and George Groves produced a modern-day classic in Manchester in late 2013. Their rematch at Wembley in 2014 would sell out Wembley – catapulting Hearn to stardom in the process.

He is a larger-than-life character, a social media sensation and acknowledged by those who know him as the best salesman they know with that killer worth ethic and tireless drive to succeed.

During a 2020 interview with ‘The Big Issue’, Hearn admitted: “There was only one way I could ever become my own person and get my own success, and that was to take what he’s (dad Barry) done to completely another level.”

He is well on the way to achieving that. Clearly there is no better starting point than selling double glazing…

Eddie Hearn has a net worth reported by some outlets as £40million. But that while that figure is largely informed speculation, what is clear is he is building a very special business empire through boxing.

Hearn’s top-class stable of stars and ability to promote anything have landed him plum broadcast contracts which drive countless millions of pounds and dollars every year.

Eddie enjoyed an exclusive and highly successful broadcast deal with Sky Sports Boxing in the UK for around a decade, with several fights every year also being shown as pay-per-view on the Sky Sports Box Office platform.

To give just a single example as to the success of Hearn’s association with Sky, Joshua is believed to have earned around £60million in total for his rematch victory against Andy Ruiz Jr in Saudi Arabia in December 2019. The fight produced record PPV revenues in the UK, with a reported 1.6million buys at £24.99 each.

That hugely successful partnership came to an end though in the summer of 2021 – when Hearn and Matchroom announced a new five-year global deal with streaming platform DAZN – which now includes the UK. The deal though will not specifically include heavyweight superstars Joshua and Dillian Whyte in the UK.

When DAZN (formerly Perform Group) looked to break into the United States using boxing in 2018, it tabbed Hearn as the front man. The two sides inked a reported $1billion deal over eight years with a view to growing a huge subscriber base Stateside. DAZN has now launched globally in more than 200 territories worldwide, again with Hearn as the driving force promotionally.

The move to a UK and global partnership for Hearn and DAZN makes perfect sense right now. It is difficult to satisfy two paymasters when both want the same thing. And DAZN launching a global platform last December (including the UK) meant a bid for Hearn was almost mandatory.

The most recent financial results released by Matchroom Boxing Limited to Companies House show the company producing an annual turnover of more than £82million. Profits after tax were more than £11million.

The wider Matchroom Sport group showed annual turnover of more than £192million in its latest results with a profit of more than £23million.

Matchroom currently produces and provides to broadcasters some 3000 hours of sports action across 600 event days each year. It is also increasingly moving into the provision of original documentaries and shoulder programming.

The enormous success Eddie Hearn has enjoyed in boxing promotion comes in no small part due to his personality and self-deprecating sense of humour.

Hearn, quite simply, appears willing to do just about anything or speak to just about anyone if it helps to sell the fight. And it is working out quite well.

The end result is not just a boxing promoter, but a social media sensation. Eddie is popular on all major platforms (including Instagram), but it is Twitter where he has really become a God. He now has more than 985,000 followers (January 2021) and is fast approaching that magic 1million figure. Incredible for somebody who doesn’t even get in the ring and fight.

Hearn’s sense of humour and ability to play to the camera has also resulted in the rise of the parody No Context Hearn Twitter account, which showcases short video clips of Hearn ‘funnies’ and one-liners. It now has 365,000 followers (January 2021).  These videos are now used by Twitter users in the UK as analogies for everyday news and events. Quite simply it has become a cult thing and only adds the lustre of Hearn’s persona. ‘No Context Hearn’ merchandise is even a thing now.

As an offshoot of those video clips, Eddie Hearn gifs and memes are also all over social media with fans latching onto his humour.

Eddie Hearn, away from the business glare, is very much a family man.

He is married to wife Chloe Hearn and the pair have two daughters – Sophia and Isabella.

Chloe has also had experience of running businesses herself. She and TOWIE (The Only Way Is Essex) reality TV star Chloe Sims ran ‘Chloe’s Beauty Bar’ in Brentwood, Essex between 2014 and 2019.

Eddie Hearn of course came from a famous family, thanks to Dad Barry’s astonishing business success, first in snooker and then into boxing and other sports. 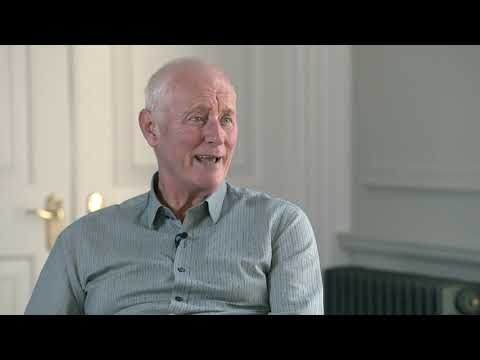 Barry was born on June 19, 1948 and is now 72 years of age. Despite a recent heart attack in 2020 (his second), he remains an active figure in the Matchroom empire, now working mainly in event strategy and global development. Barry is married to Eddie’s mum, Susan Hearn.

When Eddie was growing up, the family home was the palatial mansion in Mascalls Lane, Brentwood, Essex, which is now the home of Matchroom Sport. It also hosted Matchroom Fight Camp during the COVID-ravaged summer of 2020. Several high-profile fights were held behind closed doors in the grounds – including Dillian Whyte vs Alexander Povetkin and Katie Taylor vs Delfine Persoon 2.

Eddie Hearn has one sister, Katie, who is also very instrumental in the family Matchroom business. She became CEO of the recently-formed Matchroom Media in the April 2021 changes.

Eddie Hearn height: how tall is he?

A strange question to ask you might say, well not really. Eddie is something of a giant at 6ft 5ins (1.96m). He is just an inch shorter than his most famous client – world heavyweight champion Anthony Joshua.

It was almost inevitable given his terrific business success, that Eddie Hearn would eventually go into print to give away some of his secrets.

So it was that on October 29, 2020 his book ‘Relentless: 12 Rounds to Success’ was released by Hodder & Stoughton. Not surprisingly it was a big hit, and quickly made its way to the top of the Sunday Times List for business bestsellers.

The leading lights in Hearn’s stable right now are:

Next up for Eddie Hearn: Fury vs Joshua?

If Eddie Hearn’s career in boxing has been one long success story, Tyson Fury vs Anthony Joshua could yet dwarf anything he has achieved so far.

The two British world heavyweight champions are likely to meet in late July or early August with the undisputed championship on the line.

Fury and Joshua are expected to earn around $100million each for their involvement – making it by far the richest fight ever involving British fighters.

The bout is likely to take place outside the UK due to the ongoing pandemic, with Jeddah in Saudi Arabia the hot favourite.

Meanwhile in the United States DAZN and Fury’s partner ESPN are favourites to broadcast the fight.