Skip to content
Fury vs Joshua News Picking up the pieces: Daniel Dubois on Joyce loss

Picking up the pieces: Daniel Dubois on Joyce loss

The pain of a first professional loss does not go away swiftly for any boxer, just ask heavyweight sensation Daniel Dubois as he remembers that upset defeat by Joe Joyce.

‘Dynamite’ was 15-0 with 14 knockouts when he went into last November’s eagerly-awaited domestic blockbuster with the 11-0 Joyce.

Dubois was seen by many as the future of boxing’s marquee weight class, showcasing terrifying power every time he stepped into the ring.

But against Joyce, the weapons which had vanquished so many were not enough, and Joe gradually took control by peppering Dubois’ left eye with a spiteful left jab. 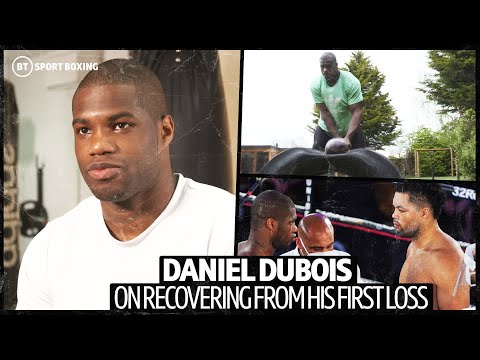 That left jab would be the crucial weapon in a fascinating fight, and by Round 10 Dubois’ eye was virtually closed. When yet another jab landed he took a knee and a 10 count to signal his first loss in the paid ranks.

Dubois on healing after Joyce loss

Medical investigations afterwards revealed a fractured eye socket. It would take a while for 23-year-old Daniel to heal physically, but first he had to heal mentally.

“You know it took a few weeks actually, I must be honest,” he said.

“Just to reflect, look back and slow everything down again, to pick up the pieces and start putting them back into place. I made decisions about the team, how we are going to move forward and what the next step is.

I was doing a lot of things, picking up different sports like playing tennis and we’ve got a pool table at home, so I was doing a bit of that.

“I needed to shake the feeling off that a loss brings. It is a down feeling and I needed to overcome it to come forward and see the light.

“The last time I lost was an amateur, it was a good few years ago, when I was 16, probably. When you are a pro and the whole world is getting to see your vulnerabilities, it is interesting, you know. It is a proper sport this boxing.

“You have to ride with it and now I am back again and ready to come back stronger. I’ve looked at it, examined it, now I am ready to push on again, iron out my mistakes and put it right.”

The defeat by Joyce, and that injury, stopped Daniel doing what he loves best – training – and he had time to take a break and take stock. He never doubted he would return stronger, and sees this as almost a new career.

That ‘second’ journey will begin against tricky Romanian Bogdan Dinu (20-2) for the WBA interim heavyweight title on BT Sport on Saturday June 5, and Dubois cannot wait to get started.

“Once I collected myself and pulled myself together, not once did I have doubts over whether I would be coming back. Maybe it turned out right that I made the decision I did.

“There was a break from everything, but I am used to being in the gym. Usually after fights it is ‘who is next?’ but that slowed down a bit and now is the time to start again in life. I feel like I am starting my pro career again, as if I am an amateur just turning professional.

“That for me is great – a fresh start. There is no better feeling than the beginning.”