Eddie Hearn says “nothing has changed” for DAZN and he is backing the streaming service to be a huge success despite the impact of the global COVID-19 pandemic.

Hearn though, who signed a reported $1bn eight-year contract with DAZN ahead of its United States launch in 2018, had a very different take as he told Boxing Social: “I think you live in a world where some of the stuff you read online is hilarious. One thing that I’m learning lately, is this creation of, whether they’re like bot accounts, like there’s about 30 accounts that just have a PBC logo on or Haymon’s Planet and they all say the same thing, so every time I Tweet they all reply with the same thing, and I am like ‘who is doing that?’.

“It’s all like ‘DAZN’s dead’ or ‘Blavatnik’s run out of money’ and I’m’ reading it and then Joe Markowski (EVP DAZN, North America) will Tweet and the same thing will go, or another DAZN fighter will Tweet and you’ll see the same. So you’ve got to be careful what you read really just in general in life.

“But DAZN are in a position where nothing’s changed. The focus, the strategy, the mindset of being a major player in the world of boxing is absolutely still there. I can’t speak on Mr Blavatnik’s behalf, but I think he’s fine, thankyou very much. I believe he has a vision – hopefully like me – to see that we can make this sport extremely powerful in the global landscape. 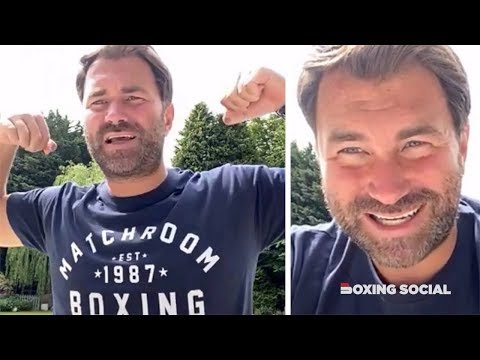 “The mindset is, I’ve got another call with them today, and that call is really just to finalise the schedule till the end of the year. I think you’ll see Golden Boy going last week in July, we’ll be going with Fight Camp with DAZN and also with an American show with DAZN in August. And then I think once you get back to September, I think you’re gonna see it flowing a lot better.”

Hearn did admit that the COVID crisis probably impacts DAZN harder than more established broadcasters, simply due to the fact it is still relatively new. It initially launched in Germany and Japan in 2016 before that big US splash in 2018. The Hearn deal was followed later by a $365m pact with Mexican megastar Saul ‘Canelo’ Alvarez and the signing of his great rival Gennady ‘GGG’ Golovkin.

“Yeah I guess so – I think DAZN’s biggest challenge was the lack of brand presence if you like through their launch and year-and-a-half of existence in America,” he said.

“They’re not ESPN, they’re not Fox, but what they are is a service that’s providing great value for fight fans, and I do believe there is huge brand loyalty as well for DAZN and what they’re trying to do.

“If you’re fight fan, and if you are depressed by $80 or $90 pay-per-views and you think ‘I don’t wanna pay this for boxing’ then I think you’re gonna be a supporter of DAZN. So it’s not like the platform’s just disappeared, there has been content, there has been fights, there is archive. But it’s still very challenging for a live sport streaming service.

“So yeah probably more challenging for DAZN, because they had more hurdles initially. But we’re all focused and I believe it’s gonna be a big success in America, as it is a huge success globally already.”

DAZN has aired Anthony Joshua’s last three fights in the United States – his victory over Alexander Povetkin in 2018 followed by the two fights with Andy Ruiz Jr in 2019. It would likely be a major player in the scramble for TV rights for a unification battle between Joshua and fellow Briton Tyson Fury.