Global streaming platform DAZN is expected to be one of the major players when broadcast rights for any Tyson Fury vs Anthony Joshua fight are decided.

But how does the future look right now for the ‘Netflix of sports’ as it looks to come out of the COVID-19 pandemic? A recent report in the Financial Times said DAZN had been hit hard by the lack of live sport since March, and claimed billionaire owner Len Blavatnik was looking for investment – or even an outright sale – to secure the brand’s future.

But Eddie Hearn – whose Matchroom signed a reported $1billion deal with DAZN back in 2018 – is not the only person who believes rumours of its potential demise have been greatly over exaggerated.

Mike Coppinger of The Athletic speaks about DAZN

Mike Coppinger, boxing writer for The Athletic and one of the sport’s most respected voices, joined IFL TV to talk about a number of topics – with DAZN being near the top of the agenda. Here’s what he had to say:

What are DAZN’s future prospects?

“I think they’re in good shape though. I’ve seen doom and gloom on social media, I think that’s not reality. DAZN has just spent billions I think on the rights to the German football league (Bundesliga rights from 2021 through 2025). DAZN has money – you don’t spend this much money and think you’re gonna just crush and dominate two years in, this is always a long game for them.

“So yeah, while they probably have lost a lot of subscribers in the meantime with no live content, I think we’re gonna see them bounce back quickly with ‘Canelo’ Alvarez on Spetember 12, they’re trying to plan that fight right now and the launch of their global app, which was supposed to go out in time for Canelo’s fight with (Billy Joe) Saunders on May 2nd. Now the problem is who is Canelo going to fight, they don’t know yet.

Should DAZN continue to put on fights between YouTubers?

I sure hope not. I didn’t mind them doing it one time – I attended the Logan Paul/KSI rematch in L.A and I had people saying ‘Oh how could you cover that?’ Well I live in L.A, that’s why, I wasn’t gonna go travel to cover it, living in L.A, especially with guys like Devin Haney and Billy Joe Saunders on the undercard, it was a no-brainer for me.

“Now when they rolled it out two months later with that embarrassing Jake Paul/AnEsonGib fight, then I’m like ‘alright, let’s not over-saturate things and let’s not get carried away’. I think relying on that’s a mistake. They need to lean on high-quality 50-50 elite matchups, that’s what’s gonna bring them the subscribers, and we need way more of that.” 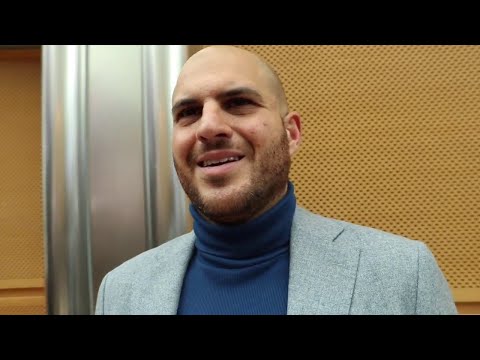 How is COVID-19 going to affect fighter purses?

“I’m always happy when a fighter gets paid a lot, it’s a dangerous sport, they’re getting hit in the head and they have a short window to earn top dollar. But at the same time, I think it makes it hard for the promoters to invest in the sport and make the best matchups. You’re looking at fighters generally getting 85 per cent of the revenue if not more, especially on the elite end. In the NFL, the NHL, the NBA you’re looking at more of a 50-50 split. And then in the UFC it’s like 80-20 in Dana White’s favour.

“I think we need to get a bit more balance if you want to see the sport grow and be healthy. I understand why the fighters wouldn’t want that, and I don’t blame them. But the pandemic I think is gonna naturally bring prices down, and it’s also a reset and an excuse for the promoters to bring numbers down regardless. I do think we’ll see that, we’re gonna see a lot of pushback and maybe at first we’re not gonna see the right fights because the fighters are gonna say ‘forget it, I’d rather make less money for fighting this lesser opponent’. I think it’s gonna take some time.”

Canelo vs Billy Joe Saunders in September? With a live gate?

“I think it was looking a lot better maybe even two weeks ago, but we’ve seen a big surge in cases here in the U.S. I think it’s gonna become difficult to rely on a gate. Right now it’s hard to have confidence in having a substantial amount of fans at a live sporting event here.

“So right now I would say no gate, and that’s probably gonna pull Saunders out – you really need eight weeks to train for a guy like Canelo, maybe more. I think Saunders is gonna be pulled out of consideration here.”