Skip to content
Fury vs Joshua News Wilder corner moves: Scott to team up with Deas

Wilder corner moves: Scott to team up with Deas

Malik Scott will team up with Jay Deas in the Deontay Wilder corner for the trilogy fight against Tyson Fury after the recent split with Mark Breland.

Former ESPN boxing expert Dan Rafael joined the BT Sport Boxing Show to discuss the moves made by ‘The Bronze Bomber’ in the last week, seven months on from that crushing defeat by Fury in Las Vegas.

Breland had been criticised after that bout by both Wilder and Deas for throwing in the towel in round seven.

Rafael said: “It’s gonna be a little different than what Fury did where he went and he decided to go align himself with SugarHill Steward. In this case what they’re doing is basically I guess is re-align the guys who are already there.

“So Jay Deas, who has been his co-trainer for his entire career – pro and amateur – is gonna stay in position.

“And you’ll see the former heavyweight contender Malik Scott – who is close to Deontay and has been in the camp – take up a role in that training camp and in that corner. So he’ll go in with Jay and Malik and go on from there.” 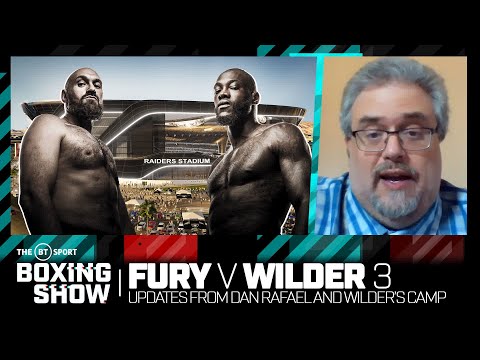 Wilder has been strangely silent since the defeat by Fury in February – his first as a professional.

That led to some experts to question whether he would go through with the trilogy fight. But that speculation has been rubbished by Wilder’s manager Shelly Finkel.

Rafael said: “Wilder’s been very quiet – I guess he’s paying attention to his training and whatever may come.

“I don’t think you’d say he was in a full blast camp because even if it was gonna take place at that time in December, it would be a little bit too early to be in a full training camp at this point.

“Deontay’s always been the kind of athlete who’s kept himself in shape – he’s probably doing some kinds of workouts.”

Fury vs Wilder 3 is still beset by uncertainty of course. Bob Arum last week said the planned December 19 date will not happen due to a packed TV football schedule that day.

He mooted a move to earlier in Decmeber, but it appears a move back into 2021 appears more likely.