Deontay Wilder says he is not surprised Tyson Fury describes him as the most dangerous heavyweight in the world – it’s “true facts” according to ‘The Bronze Bomber’.

Wilder says Fury should know all about his devastating power, having been on the deck twice in their first meeting in Los Angeles in December 2018. ‘The Gypsy King’ of course got up to hear the final bell before the bout was scored a controversial draw.

Fury would win the February 2020 rematch in convincing fashion via a seventh-round stoppage – and now the pair are set to meet in a trilogy match at T-Mobile Arena in Las Vegas on Saturday night.

Wilder on putting Fury on the deck

He told BT Sport Boxing: “I’ve already knocked him out once before – I’m sure he replays that in his head over and over again. That’s why he’s so brave to say that I’m the most dangerous man in the world. Because I am, it’s true facts.

“When you have devastating power that’s God-given, you always gonna be the leader of the pack. Some people say ‘skills, skills, skills’ but that’s just a broken record. We’ve seen many guys with skills and they’ve still lost. When you have power, you’re never out of a fight, ever.”

The talk of a Fury vs Anthony Joshua showdown for all the heavyweight marbles is now over for a while at least. That after Joshua lost his IBF, WBA and WBO heavyweight titles to Oleksandr Usyk last month.

Wilder said: “Styles make fights and with Joshua, he (Usyk) just had his number at that point in time. And I think he’s gonna have his number even more so the second time around and like he said he’s gonna be faster.

“The Fury/AJ talk – it was never gonna happen. They never had a contract. It was all propaganda and nothing I was concerned about.”

Wilder says he cannot envisage this third meeting with Fury going the distance, and is telling potential PPV buyers they are in for a treat.

“Man it’s been a long time coming, I had to go through so many different obstacles. It’s been an emotional rollercoaster but we’re here. It’s gonna be a real treat – forget bringing popcorn, bring pizza and milkshakes and hamburgers and hot dogs.” 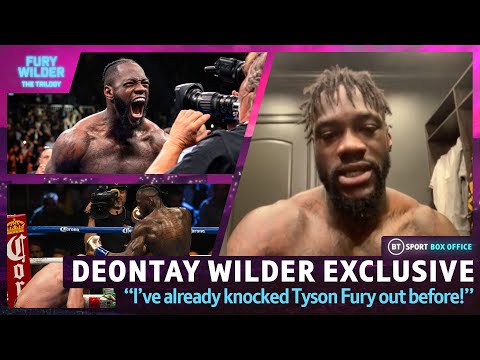 Wilder has also been delighted with his camp for this crossroads fight in his illustrious 42-1-1 career. He has good friend Malik Scott now heading up his camp, and he says the difference is spectacular.

Wilder camp is a love thing with Malik

“He brings his positive energy and he brings his love. I’ve been talking big about love in my camp and there’s nothing like it. That four-letter word to have around you at all times.

“It’s nothing that Malik has really taught me, it’s what he could bring out of me that nobody could in the past. And we’re doing it on a consistent basis.

“It’s going to be a great great show – while it lasts – and the preparation for it has been amazing. My whole team is hyped.”