Tyson Fury described Deontay Wilder as “weak” when ‘The Bronze Bomber’ refused to answer questions at the press conference to promote their upcoming July 24 trilogy fight, but Deontay doesn’t agree – he thinks he’s a “strong-willed warrior”.

Wilder suffered a devastating stoppage defeat by Fury in their February 2020 rematch in Las Vegas. It was the first loss of his professional career, and Fury says he’s been living “rent-free” in Deontay’s head ever since.

But while ‘The Gypsy King’ clearly believes Wilder is damaged goods, and is predicting an even easier victory July 24, the American (42-1-1) retains strong belief in himself – much of that belief driven by what he has been through in the last 16 months.

He told ESPN: “What I learned about myself is I’m strong-willed, I’m a warrior. I understood the circumstances that I was under. I could have went back to my corner, I could have quit and gave up. But I didn’t do it – I accepted the challenges that I was gonna be facing.

“Just to see where I am – physically, emotionally – when I say I’m the best I’m truly that. I proved to myself that I’m every bit of a king that I say I am.

“My story continues come July 24th. Im looking to be victorious – looking to show the world greatness, the best version of Deontay Wilder. For I’m on a mission, and when you’ve got a man that’s on a mission, you better get out of his way.”

Wilder had an acrimonious split with trainer Mark Breland after the defeat by Fury – Deontay was furious that Breland had thrown in the towel during Round 7. The next meeting with Fury will see long-time friend Malik Scott heading up his corner for the first time.

Wilder revealed: “We’ve always had great chemistry together, but to work together fully fledged, it feels good, it feels amazing. We’ve accomplished a lot of things back home and we’re looking forward to returning to camp and to continue what we was doing.” 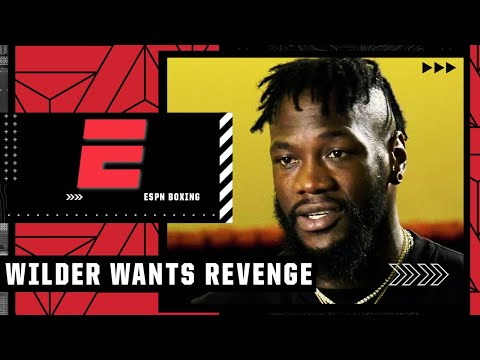 Wilder is clearly seething inwardly about much that has happened since that loss in 2020, and believes it has changed him for the better – at least in fighting terms.

“I think I’ve got a little bit meaner, I think my mindset has definitely changed. People in boxing have showed my true colours and I love it. I needed this breath of fresh air. I needed to see that.

As he looks ahead to fight night in T-Mobile Arena in a little over a month, the 35-year-old from Tuscaloosa has only one thing on his mind.

“What’s fuelling me for this fight against Tyson Fury is revenge – solely revenge. What I’ve done for him and what he didn’t do for me. Playing games. My mind is very violent right now and revenge is all I see.”