Dillian Whyte goes into Saturday night’s huge rematch with Alexander Povetkin knowing it is a “must-win fight” as he bids to get back into world-title contention.

‘The Body Snatcher’ was one step away from a WBC heavyweight title shot against Tyson Fury when he met the Russian at Matchroom Fight Camp last August.

Everything seemed to be going according to plan when Whyte – boxing smartly – had Povetkin down twice in round four. But the wily veteran came back to stun Dillian with an incredible uppercut a round later.

That loss cost Whyte his position as mandatory challenger, but now he has the opportunity to regain it in Saturday’s rematch in Gibraltar (live on Sky Sports Box Office price £19.95 in the UK and DAZN in the United States).

All on the line – Whyte

Speaking on Matchroom’s YouTube channel, he said: “It’s the biggest fight of my career, I’m coming off a loss to the guy. The good thing is this is heavyweight boxing – one fight changes everything. We’ll see – I’m sure this time when I beat him what people are gonna say.

“One, two, three losses means nothing to a heavyweight nowadays, if you fight good fighters. The main thing is you can come back. But this is a must-win fight for me.

“I’m a very adaptable kind of guy, I do whatever I need to do to get the win. If I have to rough a guy up or outbox a guy or knock a guy out, I’ll do whatever it takes to win. The plan is always to knock someone out if I can, it’s all about timing and using the timing and the opportunities that present themselves.”

Whyte has clearly studied the reasons for that shock loss to Povetkin last August. And he says adjustments have been made accordingly. In some cases merely going back to what he does best.

“Last time a lot of things was different. This time I’m much more together, I feel much better, I’m training good again. There’s things that I didn’t do last time in the last camp that I’m doing now that I used to do before. 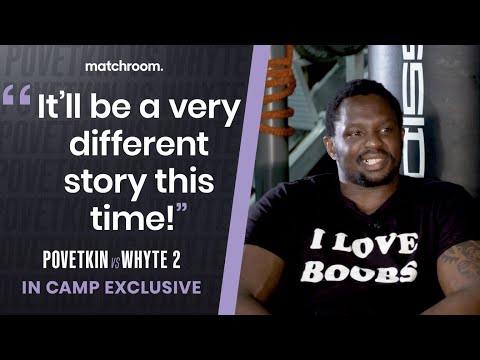 “I feel better, more explosive, I’m sparring better and feeling better. I’ve got more energy so it should be good.

“I know what works for me and obviously we’ve gone back to that and we’ll put it into place. I know deep down I can beat Povetkin. 100% the best of me. Even at my worst I can beat him.”

While Whyte has healthy respect for Povetkin (36-2-1), he believes it was his mistake which brought defeat last time. He says he realised it immediately – and it won’t happen again.

“Povetkin’s a very cagey guy, very experienced guy, very patient guy, a tough guy as well. Last time I didn’t land properly and he went down but he showed resilience, he got up and he stopped me. This time I’ve got to make sure that when I hit him, he stays down.

“I made a mistake, and straight away I knew the mistake I made. It didn’t take me a long time. It was like ‘okay, this is heavyweight boxing’ and then I wanted to get straight back in there and just get it over with and done with straight way.”

Whyte, speaking from his training camp in Portugal, was relaxed and full of smiles. The way he says he always is.

“I’m never pumped up. If you come in the changing room one minute before the fight I’m just like this, still smiling, still winding people up. This is me man, I’m not a guy that needs to psyche myself up.

“I’m a guy that when it’s go time I just go like that. I can be sitting here smiling and just get up and do a hail of violence like that out of nowhere, just like that.”

Don’t let the outwardly chilled persona fool you though – ‘The Body Snatcher’ is ready to go. The extra time brought by the latest postponement (from March 6) has helped him prepare even better. And he has a chilling message for Povetkin.

“I’m ready to go, when I touch him this time his whole body’s gonna vibrate, you understand? Just coming to do what I do best and that’s to inflict pain. If I’ve got to make it a dogfight, I’ll make it a dogfight. Last time – boxing, fighting a bit.