That stunning uppercut Alexander Povetkin delivered to KO Dillian Whyte last August shocked many in the fight game, but not Teddy Atlas.

The training great and TV analyst said that disaster was always lurking for ‘The Body Snatcher’ as his team failed to correct flaws which he says were there for all to see.

Dillian (now 27-2) had a then 40-year-old Povetkin (36-2-1) on the floor twice in round 4 at Matchroom Fight Camp and appeared en route to victory and a shot at the WBC heavyweight title held by Tyson Fury.

Povetkin though not only got up twice in that fourth round, he showed all his experience and power in the fifth to deliver an incredible left uppercut which knocked Whyte clean out.

Atlas, speaking on his ‘The Fight’ podcast, looked back at that shocking night last August, and ahead to this Saturday’s eagerly-awaited rematch in Gibraltar (live on Sky Sports Box Office in the UK and DAZN in the United States).

He said: “Whyte’s people need to undo what was done if they’re ever gonna get to that Joshua or Fury fight, ever. Or to become some sort of title holder.

“What you need to do is look at the (betting) line. He (Povetkin) knocks the guy cold and he’s a huge underdog again. He took advantage of a vulnerability or flaw in Whyte – Povetkin did what he did in a high-level way. 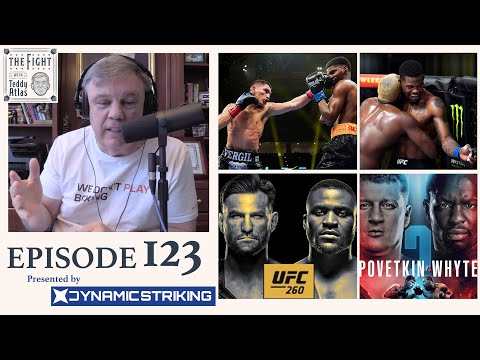 “He had been doing things wrong, he had been getting hurt, nothing got corrected. The truth is the truth. He showed heart, big puncher – he showed all those things. I like the guy a lot, a lot.

“But the truth is that while he was winning those fights, and he was taking chances, he was staying active – and I give him credit for that too. He didn’t just sit back, he was trying to get better.

“But while he was doing that, he was hurt in a couple of those fights and nobody corrected it because he won. Maybe they didn’t know how to correct it. But it didn’t get corrected and then he paid the ultimate price.

“They thought they’d get away with it because he was fighting a 40-something guy. But the guy was a former champion – I trained him of course. But he is a good puncher, tough guy and experienced obviously. And maybe he took it for granted – he had hurt him in the fight – he had him hurt, he got careless. That was all part of it, no doubt about it.

“They still had that flaw where they were getting caught with clean punches regularly, and they didn’t correct it. They didn’t see that, they didn’t understand that. Hopefully they understand it now.”

Whyte is again a heavy betting favorite for Saturday’s rematch (2/7 generally with Povetkin 5/2) and Atlas, despite his comments about Dillian’s flaws, is confident ‘The Body Snatcher’ will get his revenge.

“The reason why he’s a big favourite, he was this close to knocking him out and the guy’s older now. Povetkin’s not gonna get better.

“Whyte – the younger guy – you would think is gonna get better. He’s gonna learn from that, he’s gonna tighten up some things, if he’s got the people around him who know how to teach.

“Povetkin is 41 years old, so he ain’t getting better. The line is with Whyte, who got knocked cold. He’s the favourite because he had Povetkin down and Povetkin is older now. That is as good as Povetkin is gonna be. Those vulnerabilities he showed are probably still gonna be there.

“They (the bookmakers) are bargaining that he is gonna close the show this time. Do the same things from last time but not leave the door open for Povetkin to do what he did. I kind of agree with the lines, I think Whyte’s gonna win this time.

“Povetkin is an old warrior, an old warhorse. He showed all the heart in the world but he looked like a shopworn guy, a guy at the end of his career. But he threw a wrinkle, he threw a monkey wrench in there. He wasn’t ready to go because the guy made himself available.”

As well as Father Time advancing on Povetkin at speed, the Russian has also had to deal with the impact of COVID-19 since that win over Whyte. The rematch had initially been slated for November 21 last year, but then moved when Povetkin tested positive. Further delays have happened, most recently due to COVID-19 travel restrictions. Hence the venue switch to Gibraltar.

The WBC interim heavyweight title – and that coveted position as mandatory challenger – will again be on the line on Saturday night. The pay-per-view on Sky Sports Box Office will cost £19.95 for UK viewers.