Skip to content
Fury vs Joshua News After all the silence, Whyte is ‘ready to rock and roll’

After all the silence, Whyte is ‘ready to rock and roll’

Dillian Whyte always preaches maximum violence, and he is ready to deliver once again at Wembley Stadium on Saturday night.

‘The Body Snatcher’ finally get his shot at a world heavyweight title at the age of 34, when he challenges Tyson Fury for the WBC, Ring magazine and lineal titles in front of more than 94,000 fans at Wembley Stadium.

Whyte of course missed the first press conference to announce the bout, and also skipped Tuesday’s open workout in London. But on Wednesday he was on stage to promote the biggest fight of his life. And after all the silence so far, he was not in any mood to waste words. He is here to fight.

“There was no strategy to not being here before and there are two sides to every story and the sides need to come to an agreement. 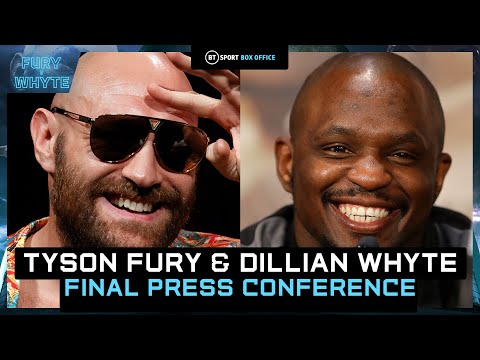 “You will see what I do on Saturday night, but I have been working on being adaptable because I will constantly need to adapt and make smart decisions. I will go in there and do my thing.”

“I am excited to be here, sorry I couldn’t be here earlier, but I am here now so let’s go.”

Whyte is an incredible story. Written off so many times after a hard journey through life which has been well documentede, he now has a golden opportunity to scale boxing’s greatest summit. And it comes in his own backyard.

Whyte written off so many times

“Like Tyson said, we never expected to be here, me especially after taking risks time and time again. I’ve had a couple of slip-ups along the way, but I am here and ready to go.”

The next big milestone in fight week is the weigh-in, which happens Friday afternoon UK time.