Whyte (27-1) is earmarked for a WBC world-title challenge against the winner of Tyson Fury vs Deontay Wilder 3 – tentatively set for December 19. That’s if he overcomes Alexander Povetkin at Matchroom Fight Camp in Brentwood, Essex on Saturday night (live on Sky Sports Box Office, price £19.95).

But promoter Frank Warren says ‘The Gypsy King’ is focused on a potential showdown with Anthony Joshua rather than a meeting with ‘The Body Snatcher’. He’d like to pair Whyte instead with his young star Dubois (14-0 with 13 inside distance).

The 32-year-old Whyte, speaking to the South London Press, was far from amused by that, saying: “Frank needs to stay off the liquor, man. He’s just trying to deviate from the Tyson Fury fight. Why would I fight Daniel Dubois when I’m mandatory for the WBC world title? Daniel brings nothing at all to the table.

“They know I love a fight and it doesn’t take much to get me into a fight, so they are just trying to throw some weight out there.” 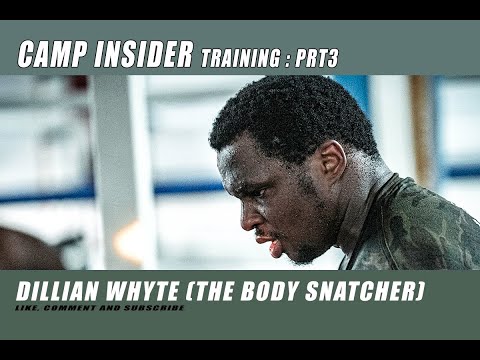 Whyte has been the WBC’s mandatory contender for more than 1000 days now, and while he could take the hallowed green belt without another fight after Saturday if Fury decides to vacate the title or is stripped, that is also a far from ideal solution as far as he is concerned.

“I don’t want that – I want to fight Tyson Fury, because he says he is the best heavyweight alive and to have ever walked the planet. I want to fight the best. Hopefully he is going to be a man of his word and not a coward and vacate the belt.”

Whyte came into his last fight – a points victory over Poland’s Mariusz Wach on the Joshua vs Ruiz 2 undercard in Saudi Arabia last December – at a career-high 271lbs (19st 5lbs). But says he is in much better condition for the crucial showdown with Povetkin on Saturday night.

“People were saying things about me and you can’t defend yourself. My stock and value plummeted,” he explained.

“I’m in a good place now. I’m back where I should be. I have an opportunity to shine against a good fighter and a credible world-ranked one.”