Skip to content
Fury vs Joshua News The big risk: Warren bets on Dubois vs Joyce

The big risk: Warren bets on Dubois vs Joyce

Frank Warren admits watching his two rising heavyweight stars Joe Joyce and Daniel Dubois return to the ring in the next four weeks is a risk he would prefer not to take.

Queensberry Promotions boss Warren sends Joyce (10-0) into battle against Michael Wallisch (20-3) this Saturday night (July 25) while Dubois (14-0) meets another German Erik Pfeifer (7-0) on Saturday August 29. Both fights will take place behind closed doors at the BT Sport Studios in Stratford, London and both will air live on BT Sport.

Should both men come through their respective assignments, there is the tantalising carrot of that all-domestic showdown between the pair already booked in for London’s O2 Arena on Saturday October 24. And Warren believes whoever wins that fight will then be banging hard on the door for a world-title shot next year.

The Hall Of Fame promoter though has been around long enough to know that any time a heavyweight gets into a boxing ring there is an element of risk involved – and he will be on the edge of his seat for the next month hoping his best-laid plans do not start to unravel.

He told BT Sport: “We’ve got confidence in both guys but anything can happen in heavyweight boxing. We’ve seen all these upsets made over the years, there’s been quite a few of them when there were gonna be some seriously big fights made.

“No doubt about it, Daniel against Joe is the biggest domestic heavyweight fight out there other than Tyson and Mr Joshua. But this could be a spanner in the works and these guys have got everything to go for.

“We’d nigh on sold out before it got cancelled. It was never a problem selling the tickets, it’s captured the public’s imagination – there’s no doubt about that. Unfortunately we’ve all been caught up in this pandemic and that was a casualty of it.

“This is a risk I’d prefer not to be taking with the two guys – it’s a shame we can’t just go straight to the fight – but we need the live audience to make it work.” 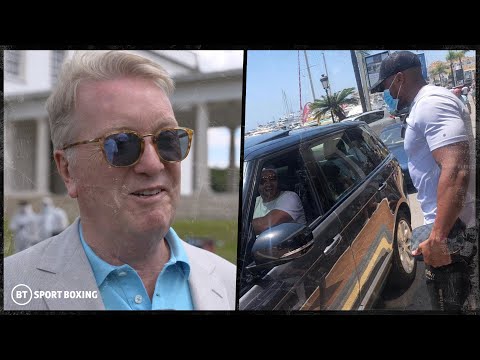 Wallisch has lost three of his last four fights after a 19-0 start in the pro ranks – with two of those losses happening against two more up-and-coming heavyweight prospects in Efe Ajagba (13-0) and Tony Yoka. Pfeifer meanwhile remains unbeaten and presents a real threat to the 22-year-old Dubois – who has wowed the experts in racking up 14 straight victories with 13 inside distance.

“Joe’s gonna have his hands full with Michael Wallisch – he’s had 23 fights, Joe’s had 10,” said Warren.

“He’s got a wealth of experience, he’s been in with good fighters. And Joe’s gotta be at the top of his game, he’s been out a while, so he’s gotta get the cobwebs and the rust off. If he comes through it we’ll all be sitting on the edge of our seats, waiting for the 29th of August – Daniel against his opponent Erik Pfeifer, who again is a quality operator. Fought in two Olympic Games, undefeated WBO European champion. So these are tough fights for them.

“It’s the toughest test I think for Daniel and it’s a tough test for Joe.  I was saying earlier, these two fights they’ve got coming up – they’re gonna actually be cheering each other on, who’d ever have thought it would come to that. They both want each other to win. They’re tough fights to get an even tougher fight. But one thing about it – whoever comes through at the end of it is gonna be I think up there probably being the number one challenger by next year for the world title.”