Hearn: Pandemic won’t get in way of Fury vs Joshua

The COVID-19 pandemic may be continuing to rage in the UK and further afield, but promoter Eddie Hearn does not believe it will scupper the impending Tyson Fury vs Anthony Joshua blockbuster.

The Matchroom supremo has been travelling the world in the days since Canelo Alvarez’s defeat of Callum Smith in Texas just before Christmas, looking at potential sites to host the heavyweight unification match.

With Britain heading into another national lockdown, it appears any hope of a full stadium for Fury vs Joshua in the UK this summer is getting slimmer by the minute.

But despite that Hearn continues to look for options further afield. And he does not believe the fight everybody wants to see will be delayed.

He told IFL TV: “I’ve been everywhere, talking to people about a couple of big fights coming up, where we’re gonna stage them.

“Theres’s been conversations every day for the last two weeks on that fight (Fury vs Joshua). A lot of the travelling I’ve been doing lately is to look at where that fight can be staged. As we have done for a long time, we have an agreement on that fight.

“But that fight is planned for the end of May, early June – and I don’t see anything getting in the way of it.” 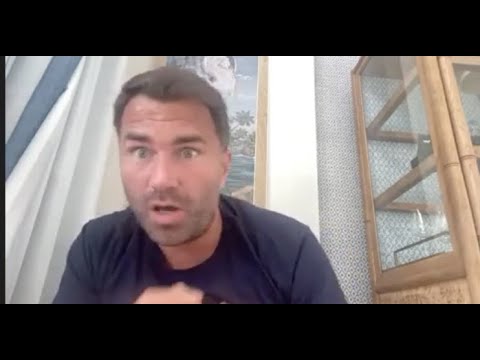 Fury and Joshua agreed in principle the financial structure for a two-fight deal as far back as last June. But they have still to sign on the dotted line. And one remaining blocker is the situation regarding the WBO belt. Mandatory challenger Oleksandr Usyk wants his crack at champion AJ next, but Hearn says hill man will not be forced into it.

He re-iterated that if the WBO force the issue, Joshua will vacate to fight Fury even though it would no longer be for the undisputed championship. All of the belts are currently held by the two Brits – AJ is the IBF, WBA and WBO king while Fury possesses the WBC strap.

“But everybody’s just got to be sensible – especially the governing bodies. This the fight of the century, one of the biggest fights ever. Don’t muck things up.

“Being undisputed is one of the biggest things in the sport in my opinion. So let’s all just be smart. The fight would go ahead with no belts but it’s everybody’s preference – especially AJ’s preference – that all the belts are on the line because it’s always been his dream to be undisputed.”