“We’re ready to sign” – Hearn on Fury vs Joshua

Eddie Hearn has confirmed that everything is agreed for a Fury vs Joshua superfight, confirming: “we’re ready to sign”.

Earlier this week Fury’s co-promoter Bob Arum said all parties had resolved contractual issues, and it was now simply a matter of putting pen to paper.

Hearn, whose Matchroom Boxing promotes Joshua (24-1), re-iterated that in an interview with Kugan Cassisus of IFL TV.

He revealed: “Bob kindly come out and gave out a 45-minute interview, when he said everyone should be quiet about it. That’s Bob. 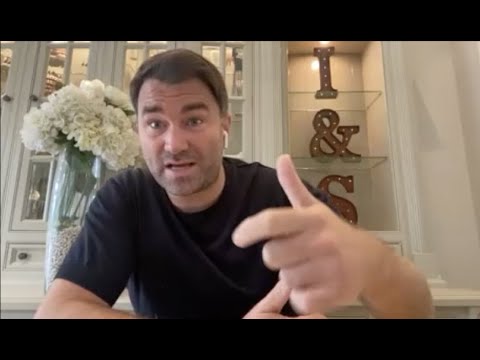 “We’ve said to them ‘go round and get all your signatures because there’s so many of them’ and we’re ready, we’ll sign the contract immediately when we have those and then fight is up and running.

“But as of yet, there is no deal because they haven’t put pen to paper and they haven’t sent us all their signatures yet but I believe that is inevitable.”

Wembley for Fury vs Joshua?

Hearn played down Arum’s suggestion that London could yet stage Fury vs Joshua given the current COVID-19 situation in the UK. But he did say discussions regarding the venue are moving fast with a potential date of June or July.

“It’s still wide open, but we are much further down the line than we were a week ago, because we’ve had to speed that process up.”

The Middle East remains favourite to stage the first meeting between Fury vs Joshua. The likes of Saudi Arabia, Qatar, Abu Dhabi and Dubai are all believed to be in the running.