It’s the dream every British fight fan hangs onto – Tyson Fury vs Anthony Joshua at Wembley Stadium this July – and it has not been ruled out yet.

While the Middle East remains hot favourite to stage the world heavyweight title unification match, Eddie Hearn has confirmed that the iconic London venue is one of the options he’d like to put in front of the fighters this weekend when they consider their next move.

Fury vs Joshua at Wembley?

Hearn confirmed earlier this week that there are “3 or 4 offers” that the teams will review before making a decision on the site for the biggest fight in British boxing history. And Wembley on July 24 will hopefully be one of them.

The Matchroom supremo, who has been around the world in recent days speaking to prospective sites, gave an update during an interview with Sky Sports. He talked about finding the fight landing spot in a massive summer of sport headlined by football’s European Championships and the Olympic Games. 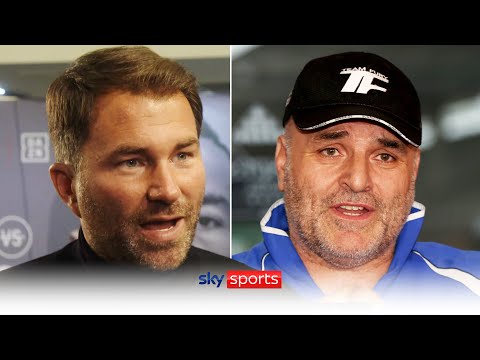 He said: “Firstly you have the Euros, then the Olympics – if they happen. When you look at the Wembley option, which is still teetering around, maybe unrealistic but it’s another option we’d like to present. That would be July 24th for example, which would be the end of the Euro period. Once you start going too deep into August you’ve got the Olympics and so forth.”

Hearn won’t give up on superfight

Despite the Fury camp openly doubting whether the finances exist in a pandemic world to allow the fight to happen now, Hearn is tireless in his refusal to believe that is the case.

“I put this fight up there as the biggest sporting event of 2021. I know the Olympics is a big period but this is massive. this is something that the whole world will stop to watch. You talk about the Rumble In the Jungle, you talk about the Thrilla In Manila, this is right up there. Two Brits for the undisputed heavyweight world championship.

“That’s why I’m not stopping on this until we get it done. You have to of course always look at TV scheduling – but it kind of stands alone out from everything else. But if we can get it in the middle, on the right night, but that of course ultimately led by the site, who will request a certain date for the fight.”

Hearn confirmed that if Fury vs Joshua does land in the Middle East, the bout will have to take place indoors due to the time of year. But while that might limit the paying crowd, it’s not something he is concerned about.

“I just wanna make the fight. We live in this world at the moment where we’ve spent the last year ducking and diving, somehow not just keeping the boxing game alive but moving the game forward with Fight Camp, with stuff at Wembley, with Gibraltar.”

Fury and Joshua signed contracts in mid-March for a two-fight deal. The agreed window to finalise the venue closes this weekend. If their first bout does go ahead in July, it is expected there will be an immediate rematch before the end of 2021.

Both men are expected to make in the region of $100million each for their first fight alone.