Promoter Eddie Hearn said he was “gutted” at testing positive for COVID-19 after being whisked away from the Matchroom bubble ahead of Joshua Buatsi vs Marko Calic this weekend.

Hearn was overseeing final preparations for Sunday’s show at Marshall Arena in Milton Keynes when news of the positive test emerged.

He now faces 10 days of self-isolation before returning to work ahead of a huge autumn schedule, which continues with a big show in Newcastle on October 17.

Hearn told IFL TV: “Every test come back negative and mine came back positive. So gutted, really, pleased that everybody else is okay, that everybody else tested negative. But unfortunately mine isn’t. So I got PPE’d up and taken out the back entrance. In the car, driving home and getting ready for 10 very long days.

Hearn has no COVID symptoms yet

“At the moment I’m in good health, that’s the main thing, but gutted that I’ll have to miss the show, and the press conference and everything, it’s what I live for.”

Hearn re-iterated that he has not yet experienced any COVID-like symptoms, and will now follow protocol to the letter as he looks to bounce back quickly.

“Feel alright in myself, feel like I’ve got a little bit of a cold I suppose, but not had any COVID symptoms – no temperature or loss of taste or smell or cough or anything like that,” he said.

“Hopefully that don’t come over the next few days. It is hat it is, gotta follow the protocol, take it on the chin, go away, get creative over the next 10 days and bounce back and come back. Off we go again.” 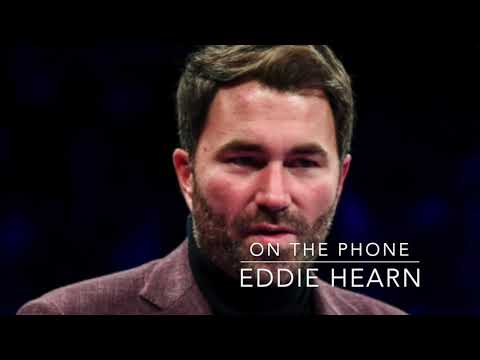 Hearn who said this test was the eighth he has undergone so far, and while he often thought of the potential to test positive, the news still came as a major shock.

“It’s easy to say now, just feel like I’ve had a cold really. Every time I’ve had a test so far I’ve thought to myself ‘imagine if you’ve got it’. Then Frank Smith called me and he was like ‘you’re not gonna believe this, you tested positive’. I was like ‘are you winding me up?’ and he said no, and obviously that was it. Had to clear off.”

Hearn is relieved all other tests in the Matchroom bubble came back negative, and says everybody’s health is the main priority and concern.

Health comes first, for everybody

“Everybody’s been tested, I didn’t go near everyone today. I’ll follow all the protocol, do everything we’ve got to do and it is what it is. I guess my kids are going to have to be off school for a couple of weeks, which is a complete nightmare. I dunno, head’s a bit all over the gaff at the moment.

“As long as we’re alright and as long as everybody’s healthy, and we’re all breathing, we’ll be alright.”