Oleksandr Usyk vs Dereck Chisora is a crossroads fight for the short-term future of boxing’s booming heavyweight division.

And if the Ukrainian southpaw emerges victorious from his match with the battle-hardened UK veteran Chisora (32-9) on Saturday October 31, he will push for a shot at Joshua’s title.

That of course would potentially push back any immediate notion of a superfight between Joshua and massive British rival Tyson Fury to unify the heavyweight titles.

So there is much at stake for what is shaping up to be a cracking showdown between the smaller, slicker Usyk and the bigger, more experienced Chisora. 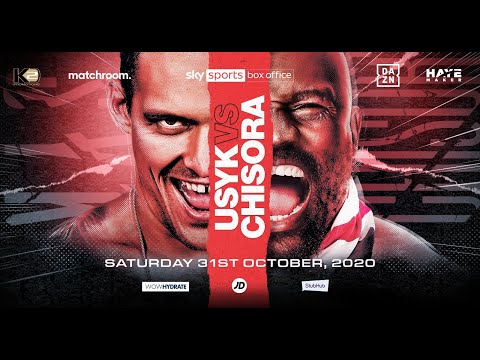 When Matchroom Boxing supremo Eddie Hearn announced on September 23 that Usyk vs Chisora would go ahead as planned on Saturday October 31, there was both surprise and excitement.

Surprise that just 24 hours after the UK Government had said all major sporting events would continue to take behind closed doors for the near future, Hearn had managed to pull this off. Excitement for action-starved fight fans that one of the most eagerly-awaited matches of the year would indeed go ahead.

The fight will take place at London’s SSE Arena, Wembley and kicks off a string of Matchroom shows at the famous venue – including Alexander Povetkin vs Dillian Whyte 2 on November 21.

Usyk vs Chisora will be streamed live as a pay-per-view event in the United Kingdom by Sky Sports Box Office and the fight will be available to view via all major platforms. The price for the event is £19.95.

Streaming platform DAZN meanwhile will air the bout in the United States, and potentially other markets – it is currently also active in Germany, Japan, Italy, Spain, Brazil, Canada, Austria and Switzerland.

The DAZN service can be live streamed live through all major platforms – including smart TVs, set-top boxes, streaming sticks, smartphones, tablets, PCs and game consoles – and costs either $19.99 for a monthly subscription or $99 for an annual subscription.

At this stage DAZN is not available in the UK. Its owners have though announced their intent to launch the service globally later this year.

Usyk vs Chisora will be screened live in Australia by Fox Sports 507. Their coverage will start at 0600 AEDT on Sunday November 1. Aussie star George Kambosos fights Lee Selby in a world title eliminator in the main support.

Chisora had a weight advantage of almost three stones when the weigh-in was held 24 hours before the main event in London.

Usyk meanwhile came in at 217.25lbs, (15st 7¼lbs) – just over 2lbs than for his heavyweight debut against Chazz Witherspoon last October.

Despite his lack of experience at heavyweight, Usyk is a hot favourite to move closer to a crack at Joshua. The Ukrainian superstar is as short as 1/8 with the UK layers, while Chisora is as big as 9/2. The draw is a best-priced 33/1.

Our expert Derek Bilton has previewed the big fight in detail, and you can get his Usyk vs Chisora betting tips here.

Oleksandr Usyk has fought 17 times as a professional – registering 17 victories against no defeats. A total of 13 of Usyk’s victories have come inside the distance.

That move to heavyweight came after Usyk had dominated at cruiserweight. He became the unified champion after notching an impressive unanimous decision against Russian Murat Gassiev. That came in the World Boxing Super Series Final in Moscow in July 2018.

Usyk then crowned his career at 200lbs by knocking out Tony Bellew in Round 8 of a massive showdown in Manchester in November 2018. 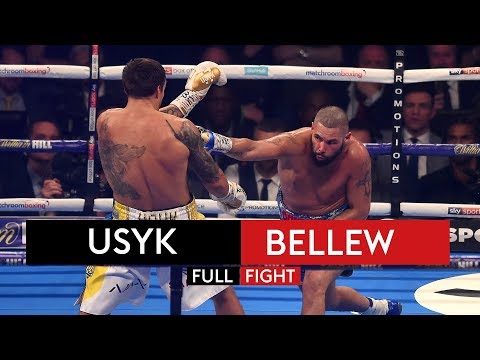 Before those glorious swansongs at cruiser, Usyk had built a reputation as one of the world’s finest boxers.

His first world title came when he easily outpointed Krzysztof Glowacki in Gdansk in 2016 to claim the WBO strap. He added the WBC belt in January 2018 with another decision victory – this time against Mairis Breidis in Latvia. Then came the unification glory against Gassiev in Russia.

Before turning professional in 2013, Usyk had been an amateur standout. He took gold at the World Championships in 2011 and then again at the London Olympics of 2012. Both successes came at heavyweight.

Dereck Chisora, known as ‘War’, has fought 41 times professionally with a record of 32-9. Some 23 of his victories came inside distance.

Chisora stands 6ft 2ins tall and has a reach of 78ins. He weighed 260lbs (18st 8lbs) for his most recent bout, a fourth-round stoppage of David Price in October 2019.

After turning pro, Dereck won his first 14 bouts and in the process claimed the British and Commonwealth heavyweight titles. His bubble was burst though when he dropped a unanimous decision to Tyson Fury.

Despite that defeat Chisora would get a shot at the WBC world heavyweight champion Wladimir Klitschko in early 2012, losing a unanimous decision to the Ukrainian great in Munich, Germany.

Chisora would later claim a European title and has since faced most UK heavyweight stars. He lost a rematch with Fury and also went down to another world champion in David Haye.

A defeat by Kubrat Pulev in May 2016 in an IBF world heavyweight title eliminator scuppered Dereck’s chances of another world-title shot. He would also later face Dillian Whyte twice, losing both times.

Savannah Marshall’s WBO middleweight title showdown with Hannah Rankin has been added to the undercard.

The heavyweight showdown between fan favourite Dave Allen and unbeaten American Christopher Lovejoy though is OFF due to contractual issues.

The bantamweight showdown between Kash Farooq and Martin Tecuapetla has also been cancelled due to a positive COVID-19 test for a Farooq team member.

The undercard fights confirmed so far are as follows: