Eddie Hearn took a while to respond to taunts directed at Anthony Joshua by Tyson Fury, because he says ‘The Gypsy King’ has blocked him on Twitter.

Fury was clearly unimpressed after Joshua knocked out Kubrat Pulev in nine rounds in London on Saturday night. In the immediate post-fight interview AJ stopped short of saying he wanted to meet Fury next in a massive unification showdown.

That led to Fury taking to Twitter to say Joshua had “just s*** himself on live TV”. Hearn later had to be told of those comments by IFL TV as he was interviewed after the bout.

Hearn hits back at Fury comments

He said: “I haven’t seen he’s blocked me on Twitter. Big dosser, all that sort of stuff. We’ll who sh*** themselves. Ultimately AJ’s not the kind of guy who’s gonna shout and scream on TV and call people dossers. We’ll sign the fight and get it done.”

Hearn says he is ready to get Fury vs Joshua finalised immediately and stressed that the Joshua camp are “all in” on the bout.

“We’ll start talks tomorrow. There’s about 19 people who claim to work on that side. We know who we’ve gotta deal with, we’ll get it done. We’re all for it, I honestly can’t tell you there’s one person who doesn’t wanna move forward with that fight.

“Rather than just talk about it, let’s just keep it low key, keep it under the radar and get it done. Because shouting and screaming doesn’t solve anything. We’re all in.” 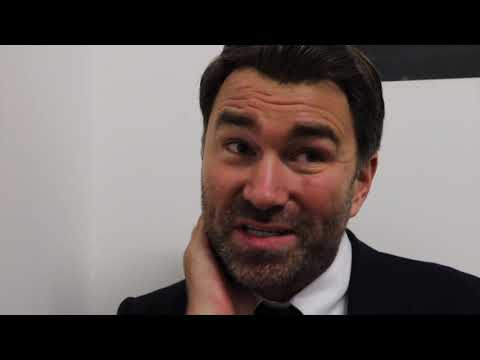 Hearn praised Joshua’s performance in crushing Pulev. He said: “Great performance, proud of AJ, lot of pressure on him as always. Onwards and upwards, still the unified heavyweight champion of the world. Still the best heavyweight on the planet in my humble opinion”.

The Matchroom supremo believes the bout should have been stopped in the third when Pulev took a standing count and then suffered a knockdown.

He added: “The finish was absolutely brutal, the right hand down the pipe was just a curtain closer.”

Fury and Joshua have agreed in principle the financial structure for a two-fight deal. A 50-50 revenue split for the first bout with the winner taking a 60-40 share for the rematch.