Eddie Hearn on Fury condition: “he looked like me!”

Eddie Hearn has responded to those images of Tyson Fury jumping into the freezing sea last week by exclaiming: “he looked like me!”.

‘The Gypsy King’ stripped down to his shorts to dive into the icy waters off the coast of Morecambe in Lancashire. Leading to some fight fans and experts to talk about his current condition, or lack of.

Hearn, speaking to Seconds Out on YouTube, was asked for his view ahead of the planned Fury vs Anthony Joshua superfight in June.

He said: “I think before he goes into any main camp he doesn’t look like AJ – ever. I said to AJ the other day: ‘f***ing hell, see Fury jumping into the sea? looked like me’. 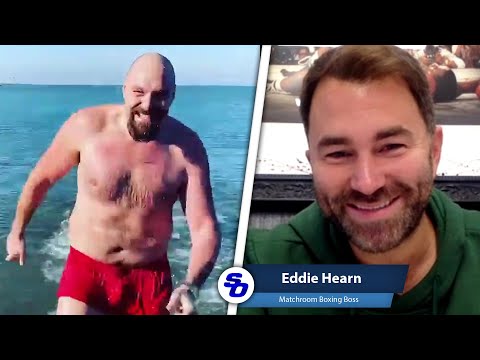 “The response from AJ was ‘we’re gonna get the best Tyson Fury. So I don’t care if he’s carrying a little bit of weight now, I’m training for the best ever Tyson Fury’.

“Make no mistake, Fury will be in top shape for this fight, we’ve still probably got maybe five months to go, four or five months. He hasn’t even started camp yet.”

Hearn paid tribute to the dedication of both Fury and Joshua, and says his man AJ is utterly focused on winning the biggest fight of his career so far.

He continued: “I think the impressive thing for both these guys is, they haven’t stopped training. AJ since his last fight, and he don’t wanna stop training.

“He’s sparring, he’s training, he’s preparing for the fight of his life.”

A deal for Fury vs Joshua is close, with contracts in the process of being finalised. The fighters had already agreed in principle the financial structure of a two-fight deal last June. They will share revenues 50-50 for the first bout, while the winner will take a 60-40 split for the rematch.

It is expected the bout will take place outside the UK, with the Middle East centres of Saudi Arabia, Qatar and Dubai leading the bidding.

From a TV perspective Fury vs Joshua is likely to be aired on Sky Sports Box Office and BT Sport Box Office as a pay-per-view in the UK. It is likely ESPN and DAZN will share rights in the United States.

Fury’s co-promoter Bob Arum believes the two fighters will earn in the region of $100million each for the first bout alone.