Tyson Fury is a firm odds-on favourite to defeat Deontay Wilder once again when the pair meet next month in their trilogy fight, but Carl Frampton says nobody should discount the ever-present threat from the big-punching ‘Bronze Bomber’.

Fury vs Wilder 3 is booked for Las Vegas on Saturday July 24 after the collapse of that Fury vs Joshua showdown planned for Saudi Arabia in August.

Joshua meanwhile is likely to defend his IBF, WBA and WBO heavyweight titles against Oleksandr Usyk in August.

The heavyweight division is booming right now, as strong as it has been for a long time. And former two-weight world champion Frampton is not alone when he says it’s up in the air how the title picture shakes out in the coming months.

One thing Frampton is clear on though, is the massive danger still posed by Wilder despite that crushing defeat at the hands of Fury in their last meeting in February 2020.

He told BT Sport Boxing: “We’ve got the two big fights now, Fury and Wilder again, which isn’t a certainty. Fury won the first fight in my opinion, and he definitely won the second fight convincingly.

“People think that this is a given fight that he beats Wilder again. No way, Wider is a puncher. I think Wilder is probably the biggest puncher in heavyweight boxing right now. Possibly in heavyweight boxing ever. So if he lands, it could be lights out, so I hope there’s no complacency from Tyson. 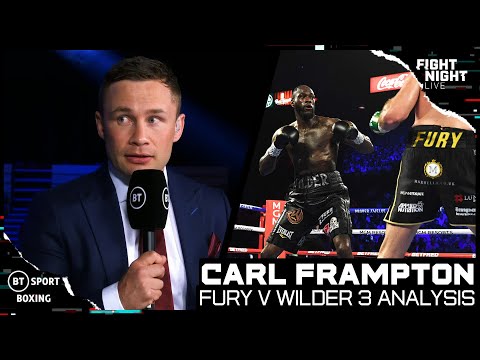 “AJ against Usyk – a very good fight, Usyk’s a lovely boxer but I think AJ’s size wins him that fight.

“We all thought that Fury and AJ was agreed and that never happened so who knows what’s going on in this game.”

Frampton was speaking after the return of Daniel Dubois to ring action in a second-round knockout win over Bogdan Dinu.

Dubois (16-1) had been out for seven months since suffering a horrific eye injury in his first professional defeat by Joe Joyce last November.

‘Dynamite’ is now the WBA interim heavyweight champion, but Frampton believes the 23-year-old prodigy should not be rushed when it comes to the biggest fights out there.

He said: “Dubois, that was a good performance from him. This kid’s young, there’s no need to rush him as of yet. They’re all talking about the big fights, just give him a bit of time with his new trainer – let them work together, let them gel together.