July still the plan – Matchroom boss on Fury vs Joshua

Tyson Fury vs Anthony Joshua in July is still the plan for the all-British superfight, according to Matchroom Boxing CEO Frank Smith.

Fury’s co-promoter Frank Warren said earlier this week that late August or September are more likely. He cited the Olympic involvement of Joshua’s trainer Robert McCracken as one of the reasons.

But Smith, who said he hasn’t seen those comments, re-iterated that from the Joshua side July is still very much what the camp are pushing for.

Speaking to Michelle Joy Phelps and Behind The Gloves, he said: “I think we’re still looking at the summer, July August time. Pushing for July, that’s always been the plan to make it happen around then.

Moving in the right direction

“I think the key point is everyone’s pushing in the same direction. The fighters are up for it and now we just need to work through the details. It’s not like click your fingers and it’s done. We’re going in the right direction.

The road to finalising the fight has been an absolute rollercoaster so far – one day positive vibes, gloomy predictions the next. But Smith says everything is very much heading in the right direction. He talked about the sheer scale of logistics involved.

“I think it’s just been – as you can imagine for a fight of this magnitude – it isn’t just ‘ok, here’s the date, turn up see you there, perfect, all done’. There’s a lot of work from all sides to make it happen.

“I’m confident, as  we’ve seen and the guys have been saying, it’s moving in the right direction. We’re very hopeful we can make that happen. There’s been a number of proposals put together and I’d hope in the next few weeks we’d be in a better place to come out publicly.

“There’s a lot of work going on eery day in the background and our aim is to get the fight on. Everyone wants to see it and I think with the interviews you’ve seen, you saw Tyson the other day, Josh has been talking about it a lot. Both guys want it so I think now’s the time to make it happen. 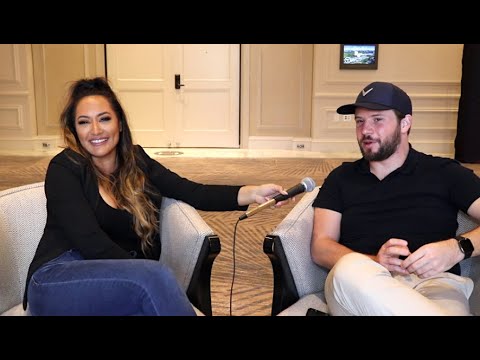 Fury said only on Sunday that he was ready to walk away from the bout this Tuesday if he didn’t get the assurances he needed. Smith though played down those comments.

“We’re talking constantly, we’re all moving in the right direction. Haven’t heard any more from him (Fury) since Tuesday. He’s quite a vocal character. There’s a lot of work that needs to go into it. All the details need to be worked through by a number of different people.

“I haven’t heard anything bad from him yet so maybe he got what he wanted on Tuesday.”

The contracts Fury and Joshua signed in mid-March were for a two-fight deal. It’s hope that a first meeting in the summer would allow an immediate rematch before the end of 2021.

Saudi Arabia appears to be favourite to stage the first meeting, with the UK would come very much more into play later in the year. It’s hoped by then something approaching full capacity crowds will be allowed in domestic arenas.