Frank Warren on latest “bump in road” to Fury vs Joshua

Frank Warren is not giving up on Tyson Fury vs Anthony Joshua, but admits there is now another “bump in the road” to negotiate to deliver the biggest fight in British boxing history.

No sooner than Fury had gleefully announced an August 14 date to fight AJ in Saudi Arabia, Deontay Wilder won an arbitration ruling to torpedo those plans.

The ruling means Fury must give Wilder the trilogy fight that never happened in 2020, before September 15. Unless the pair can agree an extension or resolution.

With Oleksandr Usyk’s team already claiming they are in talks with Eddie Hearn to make Joshua vs Usyk, any immediate chance of Fury vs Joshua happening appears to be in grave danger.

Warren on Fury vs Joshua latest

Warren, who co-promotes Fury along with Bob Arum, said: “We’ve got another bump in the road to try and get over, but hopefully we can and keep moving forward.

“The judge, or the arbitrator, made his decision last night. Top Rank and their lawyer was very very confident that they would succeed, but that wasn’t the case. 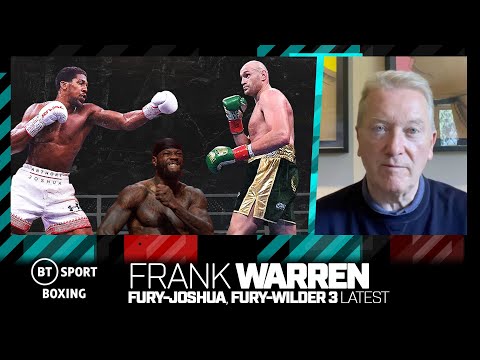 “So now we’re in a position where Tyson’s been ordered to fight Deontay Wilder by September. So we’ve got to find an accommodation with Deontay’s team and Deontay to let the Tyson vs AJ fight happen, or Tyson will fight Wilder. It’s as simple as that.”

Warren says any attempts to find a resolution with Wilder need to be done privately, and he does not believe it will just be about step-aside money.

Warren not giving up on superfight

“We’ve got to work very hard now to try and resolve the situation.”

The site fee agreed for Fury vs Joshua to meet in Saudi Arabia – reportedly around $155million (£109million) was the biggest in boxing history. And the bout was scheduled to be for the undisputed world heavyweight championship.

It would have resulted in the first undisputed champion since Lennox Lewis in 1999. But now everything hangs in the balance and one man holding the power and leverage in his hands – Deontay Wilder. We await the next twist in this exhausing plot.