Fury had to fight Wilder or retire – Frank Warren

Frank Warren has responded to John Fury’s high-profile criticism by revealing that Tyson Fury had a stark choice after that recent arbitration ruling – fight Deontay Wilder or retire.

Fury Sr said that he was unhappy with the way the planned Fury vs Anthony Joshua unification fight fell apart so swiftly and his son signed for the Wilder trilogy.

Warren though says the arbitration ruling came as a result of the initial Fury vs Wilder 3 contract all parties signed. And he added that the ruling left them with no choice but to resurrect that fight.

When asked about Big John’s comments, Frank told BT Sport Boxing: “That’s not my fault. It is what it is. The fact of the matter is why I never made an announcement about the fight (Fury vs Joshua). I knew there was an arbitration and I knew the lawyers were saying ‘you’re gonna win this’. But you know what, until you win it you haven’t got nothing. Until that contract is signed for a fight of that level, you’ve got nothing.

“The deal wasn’t done between BT and Sky for how it was gonna be done, there was outstanding issues. It was only that Motormouth was going on every other day saying ‘big announcement, sign the contracts’. Well it couldn’t be signed because there had to be a decision with the arbitration. 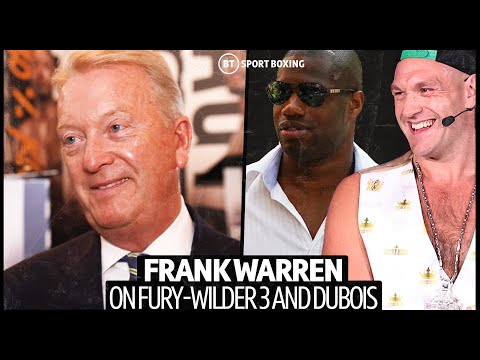 “John said about vacating the title so I understand, well he can’t vacate the title. Or he can, but he’s still gonna have to fight Wilder or retire. And if he doesn’t fight Wilder, then Wilder’s camp and Wilder will sue him for many many millions of dollars. And if anyone tried to promote him in between, they would be sued and probably get an injunction to stop it from happening.

“That contract that was signed had an arbitration clause in it. That’s what the decision was for all the signatories to that contract.  Tyson signed it as well, they all signed up on it. And now the arbitrator has made a decision and that’s what it is.”

Fury vs Wilder 3 will now take place in Las Vegas on Saturday July 24, while Joshua is now likely to defend his IBF, WBA and WBO titles against Oleksandr Usyk in August.

If both men win, it is hoped Fury vs Joshua could still take place before the end of 2021. The pair had in March signed contracts on a two-fight deal. August 14 had been planned as the date with Saudi Arabia bankrolling an incredible $155million (£109million) site fee.