Tyson Fury and Anthony Joshua have approved a venue for their superfight to unify the world heavyweight titles.

The massive news comes after weeks of speculation about whether the fight could even take place with the world still battling the COVID-19 pandemic.

Joshua’s promoter Eddie Hearn put “multiple offers” on the table following a world tour of potential host territories earlier this month. And now the two men have settled on one. An official announcement should follow soon.

While some experts doubt the bout can take place in high summer, Hearn’s colleague – Matchroom Boxing CEO Frank Smith – said this week that his team are still pushing for a July fight.

We’re in a great place – Hearn

And on Thursday night Hearn told Behind The Gloves: “Both sides have approved the site offer that they want to go with, and now we’re just finalising the site deal and we’re in a great place. 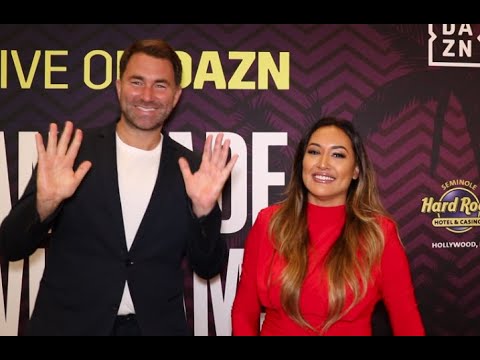 “We just had five or 10 minutes together and it was good, because I don’t represent Tyson Fury, so I don’t know what is in his mind. What he basically cemented in my mind was, this is the only fight he wants, and I know that’s the same with AJ.”

The new is another major breakthrough in the long-running Fury vs Joshua saga. The two men agreed in principle the financial structure for a two-fight deal as long ago as June 10 last year. They eventually signed contracts last month.

The venue and date – given the impact of the pandemic right now – were always going to be the toughest nut to crack. Finding a territory which could host a crowd and put up a massive site fee is no mean feat.

Both men are expected to earn a mind-boggling $100million each for their first fight alone. The immediate rematch – it is hoped – will take place before the end of 2021.

Fury remains favourite to beat Joshua, with the WBC, Ring magazine and lineal heavyweight champion a best-priced 4/7 to maintain his unbeaten professional record. AJ is best value at 8/5 with the draw a top-priced 22/1.