Tyson Fury believes Anthony Joshua is “very vulnerable” and expects an early victory when the British titans meet in that huge showdown later this year.

The two heavyweight world champions are expected to meet in late May or early June to unify the titles. They are tabbed to earn around $100million each for the biggest bout in British boxing history.

Promoter Eddie Hearn says there are a number of territories looking to stage the bout – including Saudi Arabia, Qatar and Dubai – with the likelihood it will not be staged in the UK due to COVID-19.

Fury, speaking to Tom Gray of Ring magazine as he accepted his 2020 Fighter of the Year award, doesn’t expect it to be a long night through for the millions who will shell out pay-per-view pounds and dollars.

He said: “I just see me winning the fight early on, maybe 1, 2, 3 rounds. I don’t think Joshua can take what I’m about to dish out. I think he’s very vulnerable.” 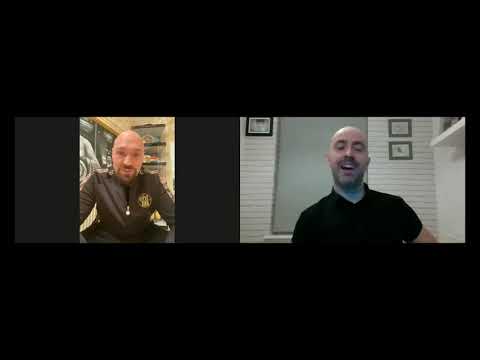 “There’s always someone to slay. The king always has to slay a few dragons. I’m 32 years old, I’ve accomplished everything in sport and 10 times more.

“I don’t fight any more for a belt. I don’t fight for money, I’m not fighting for fame. I’m fighting now because I love to fight and I’ve got nothing else to do.

“So just to walk away at this level, I don’t know what I’d do with myself and I’m just not ready for that chapter right now.”

Fury vs Joshua not done just yet

While Hearn and fellow promoter Bob Arum have said the fight is basically agreed, if not contractually confirmed, Fury says there is a little way to go yet.

“Nothing’s over the line yet though. There’s no date, no venue, nothing confirmed. We’re quite a while away but hopefully it will happen,” he explained.

“It’s come at a tough time because nobody can leave their own house, never mind think about a big fight. It’s terrible times for the world at the moment and I’ve not been concentrating on anything other than just staying mentally well and trying to stay fit and try and motivate myself.

“January’s wet, it’s grey, it’s terrible. It would be pretty easy to drift into a big depression with the fact that nothing is happening and nobody can do anything in life.

“But we’ve got to stay positive, keep motoring together and moving forward in a positive manner.”

Fury, who scooped The Ring award for that devastating destruction of Deontay Wilder back in February, made history in the process.

“I’m aiming to win it six times though like Muhammad Ali did. I want to set records and break records.”

Fury shared the coveted award with new unified lightweight champion and Top Rank stablemate Teofimo Lopez, who stunned Vasiliy Lomachenko last October. It was the first time since the 1980s that Ring had named co-winners.

Fury said: “It’s fantastic for Teofimo to get a chance to have a bit of glory after his excellent performance over Lomachenko. May I say I tipped him, I told you so! Let’s hope we have some big years ahead, very big year.”ne