Tyson Fury vs Anthony Joshua is likely to take place in the Middle East later this year, according to the Head of Sky Sports Boxing Adam Smith.

It appears inevitable now that the rampant COVID-19 pandemic has scuppered any chance of a full domestic stadium for the biggest fight in British boxing history.

Instead, a number of territories overseas are heading the queue to stage what will be one of 2021’s marquee sporting events – including Saudi Arabia, Qatar, Dubai, Singapore, China and the United States. Fury is a 4/7 betting favourite, with AJ around the 11/8 and 6/4 mark.

“Saudi or Qatar, Singapore, China – lots of places have come in. We’ve been to Saudi before haven’t we (for that Joshua vs Andy Ruiz Jr 2 rematch in December 2019), we saw what happened there, so these things can be done.”

While the fact the bout is heading overseas is a disappointment for UK fight fans, Smith is at least upbeat that the superfight is going to happen at last.

He said: “I do believe Fury/Joshua or Joshua/Fury – however it’s gonna end up being called –  the fight that everybody wants to see, I do really believe it will happen in 2021. I think there is still a way to go. Talks are progressing, they’re keeping very close and they should do.

“I get little titbits obviously from Eddie and the fighters,  but I think that there is a long way to go. We’re not there yet. What’s gonna happen with Deontay Wilder? There’s a lot of rumours, will he fight Charles Martin or someone like that? I don’t know. Is that situation  sort of resolving itself?

“What about Usyk, will Usyk do maybe the right thing for world boxing and almost step aside, but also for his career he wants that shot. So who knows how many belts are going to be on the line. 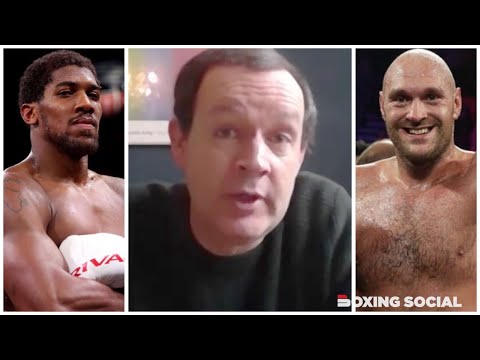 “I think they need to get the fight sorted first, then they need to look at the venue and obviously the broadcasters and everything else. A lot of complications – we know about Sky, BT, ESPN, DAZN – all of that. There’s lots to be sorted out but I think we can be quietly confident.”

It appears likely that Fury vs Joshua will be a joint pay-per-view in the UK with both Sky Sports Box Office and BT Sport Box Office airing the bout. AJ has an exclusive contract with Sky while Fury has a matching rights deal with BT.

The fighters are likely to earn around $100million each for their night’s work – comfortably the biggest purses ever earned by British fighters.

The financial pact they agreed last year is for a two-fight deal – a 50-50 revenue split for the first fight and a 60-40 share to the winner for the immediate rematch.

It is hoped that the COVID-19 pandemic may have subsided enough for that rematch to take place in the UK, but that of course remains to be seen.