Tyson Fury has earned a 50-50 split for his potential superfight against Anthony Joshua for the world heavyweight titles, according to Eddie Hearn.

The pair are confidently expected to meet next summer in the biggest fight in British boxing history. As long as AJ disposes of Kubrat Pulev (28-1) this Saturday night (live on Sky Sports Box Office and DAZN).

Hearn believes that globally Joshua is “on a different planet” to Fury from a commercial perspective – he has a string of lucrative endorsement deals with the likes of Beats, Hugo Boss and Under Armour.

But he does admit that ‘The Gypsy King’ – a huge star in both the UK and America – now deserves financial parity for the massive showdown.

He told Sky Sports: “You do have to give him (Fury) the respect, not just through his popularity, but because of his performances. Many times in the post, we offered Wilder and Fury 60-40 and I felt that’s all they deserved. Now Tyson gets his 50-50 and he’s earned that. He had a great win over Deontay Wilder.

“Ultimately, yeah, I think that Fury needs AJ to make that kind of money, but AJ needs Fury for that final piece of the jigsaw. So all in all, it’s a match made in heaven.” 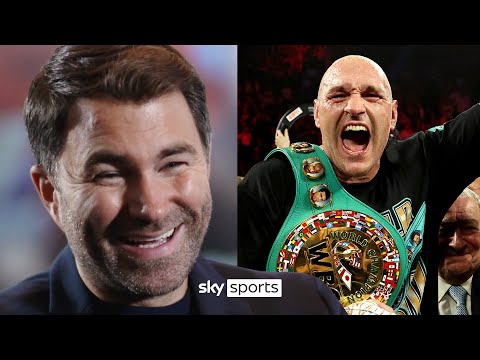 Fury had been due to face Wilder in a trilogy fight in December, but that is now off and he has no confirmed next fight. Hearn is extremely hopeful AJ will be his next foe inside the ring.

No excuses, Fury vs Joshua should happen

“So for me, let’s make it straight away. No excuses why that fight shouldn’t be made. Everybody wants it and I don’t see any way it doesn’t get made. All AJ’s got to do is do the business against Kubrat Pulev.

There is talk that Fury will be ringside for Joshua vs Pulev – and that Fury vs Joshua could even be announced that same night. Hearn would love to have Fury on hand at the SSE Arena, Wembley.

He said: “You’re welcome you big dosser. he’s always welcome. He’s a character, I love Tyson Fury, I think what he’s done is incredible. I’ve just always believed that Anthony Joshua will knock him out.

“But he’s always welcome at Wembley, round my gaff for a bit of Sunday lunch if he fancies it as well. Great heavyweight, great champion, two great champions, one amazing fight.

“If (Joshua) he can get the job done, the business done, maybe those two can get in the ring and have a little chat and confirm that we’re good to go.”