Skip to content
Fury vs Joshua News Tyson Fury to Joshua: ‘Stop running away and fight’

Tyson Fury to Joshua: ‘Stop running away and fight’

Tyson Fury has told Anthony Joshua to “stop running away” and make the fight that the whole of Britain wants to see.

A major hurdle to a Fury vs Joshua unification showdown was removed on Saturday night when the WBC’s mandatory contender Dillian Whyte was stopped inside five rounds by 40-year-old Russian Alexander Povetkin.

Now, instead of being forced to defend his WBC title against Whyte, Fury knows that if he overcomes Deontay Wilder in their trilogy fight (planned hopefully for December 19) he is free to move on to a monster clash with Joshua. The pair have already agreed in principle the financial structure of a two-fight deal, with most experts believing the first bout will take place next summer.

Fury though accused Joshua’s promoter – Eddie Hearn’s Matchroom Boxing – of trying to protect AJ by putting hurdles in the way, namely Whyte. But now he has told them to “put your nuts in your handbag” and make the fight.

He told BT Sport Boxing: “As fighters we just want to fight whoever’s the big fights out there. I know Eddie hearn and Matchroom were trying to protect Joshua by not letting him fight me. Trying to put a hurdle in the way with Dillian Whyte – ‘if you don’t fight Dillian Whyte, you and Joshua won’t fight’.

“But the fact of the matter is I don’t need any of their fighters, they need me. I am the only undefeated world heavyweight champion that’s left out there. All the rest have fell by the wayside and been chinned and knocked out and stopped and battered. So they need me, I’m a standalone ‘Gypsy King’ giant, ruling the division, ruling the roost.

“Stop running away, stop making excuses, put your nuts in your handbag and let’s get to fight.” 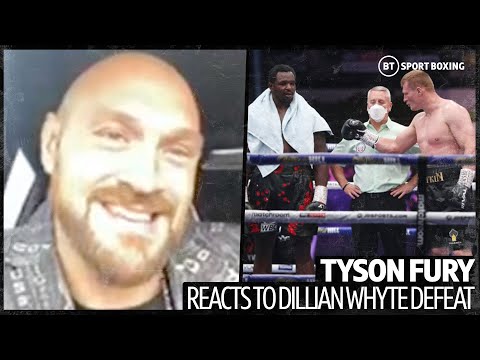 Fury meanwhile re-iterated what he has said many times in the past, that he will not be forced to make decisions on who he fights by sanctioning bodies. So for that reason he says he didn’t particularly care whether Whyte defeated Povetkin or not.

“They can’t force me to do anything. I’m what you call the big dog in the game. I run the game,” he said.

“No matter who tries to force me to do anything, the man who has the decision on what I’m gonna do is Big Daddy Mac here, me, ‘The Gypsy King’. It doesn’t matter what someone says. If I wanna dance to the music, I will. If I don’t wanna, then I change the channel.”

Whyte’s defeat by the veteran Povetkin was an upset, but Fury says it proves ‘The Body Snatcher’ is just on a level with the rest of the heavyweights, a level beneath him.

He claimed: “All these boxers like the Joshuas, the Whytes, the Chisoras, the Povetkins, all them people are around about on the similar level.

“I see them as like 4s, 5s and 6s all mixing together, and at any given time they can take each other out. As you seen with Chisora and Whyte and Takam and ‘Baby Miller’. On any given night they can all have victories over each other. That’s heavyweight boxing.

“But as for Dillian Whyte getting knocked out, it was what it was, regroup, back to the drawing board. It just shows you what level they’re at. Povetkin’s 40 years old, fit and inspiration for men at that age. it was a good fight, I enjoyed it.”